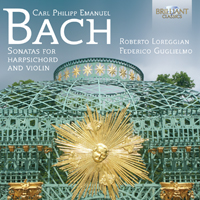 The fifth child of the undisputed king of the Baroque period, Johann Sebastian Bach, Carl Philipp Emanuel Bach was born into a musical dynasty of enormous proportions, the likes of which the world has not seen since. Living up to his father’s reputation, Emanuel became the most influential composer of Protestant Germany during the second half of the 18th century, and was renowned for his keyboard compositions. He meticulously catalogued his compositions during his life, and yet many of the works show a willingness to adapt the performances depending on forces and instruments. With the exception of Wq73 and Wq74, the works on this recording seem to be specified as two-instrument works, and are therefore performed with harpsichord and violin. Each of the works comes from the period between 1731 and 1763, the height of the composer’s creative life.

Violinist Federico Guglielmo has been hailed as ‘the new star of the ancient music landscape’ by the Boston Globe, and is a multi-award-winning artist; among the prizes he has won are the Antonio Vivaldi International Recording Prize and the coveted Diapason d’Or. Robert Loreggian is at the harpsichord; a sought-after chamber performer and currently professor at the ‘Claudio Pollini’ Conservatory in Padua, he has been praised by The Arena for the ‘virtuoso technical expertise … extraordinary inventiveness and expressive imagination’ of his playing.

Other information:
- Recorded in 2013.
- The wealth of new releases celebrating the Carl Philipp Emanuel Bach Year 2014 has shown us an original and independent craftman, a creative and innovating mind, and a free and deep feeling soul, welcome to the canon of Great Masters!
- This new recording presents the sonatas for violin and harpsichord, or vice versa, as both instruments hold equal rights and importance.
- Played by two masters of the Italian Baroque scene: violinist Federico Guglielmo gathered fame as leader of l’Arte dell’Arco (winner of numerous record prizes and distinctions), and harpsichordist Roberto Loreggian, equally famous in his field, and originator of the Brilliant Classics Frescobaldi Edition.
- Contains liner notes on the works and performer biographies.
More Less