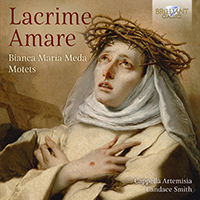 The revival on record of forgotten music by a Benedictine nun: a valuable discovery for fans of the early Baroque.

Even in the extensive library of little-known composers whose music has found a niche on Brilliant Classics, the name of Bianca Maria Meda (1661?–1732/33) counts as obscure. Little is known about Meda
other than the scant details printed on the title page of the edition of these motets, printed in 1691: her name; her title: donna (indicating her position as professa in a Benedictine convent); and the name of the monastery where she lived: San Martino del Leano, in Pavia. She probably took holy orders as a teenager, and she was followed by several other members of her family.

These motets are sacred but not designed for liturgical use, setting first-person texts (possibly by Meda herself) on themes such as the renunciation of worldly pleasures, an ardent love for Jesus the bridegroom, and requests for intercession by Mary, the Queen of Heaven. The wide range of the vocal lines, as well as the difficulty of the vocal and instrumental parts, indicate that both singers and instrumentalists in Meda’s convent were highly skilled. Although the scores can be performed by a mixed voice ensemble, this recording restores them to the kind of performance that would have been heard in the convent of San Martino del Leano, with a light instrumental ensemble accompanying an all-female choir.

The album is an absorbing sequel to Capella Artemisia’s debut on Brilliant Classics with ‘Weep and Rejoice’ (BC94638), also reviving little-known Italian 17th- and 18th- century composers. ‘The musical range and dramatic impetus present in these performances by Cappella Artemisia is quite extraordinary. […] Many [names of composers] are obscure and richly deserve this superb reading. […] The all-female vocalists (predominantly native Italian speakers) work in various permutations and when en masse produce an appealing rich sound […] Wholeheartedly recommended’ (Early Music Today).

The only fact known about the life of Donna Bianca Maria Meda is that her “Motetti a 1, 2, 3, 4 voci, con violini e sanza” were published in 1691 by the Bolognese publisher Pier Maria Monti.
Donna Bianca Maria Meda was a nun, a “Donna” which means that she was a Professa in a Benedictine convent. Her life was spent in the monastery Martino del Leano, in Pavia.
This new recording contains her 12 motets: two for solo voice (soprano and bass, with paired obbligato violins), two duets (soprano and bass), four trios (soprano, alto, bass) and four quartets (soprano, alto, tenor, bass). All motets are with organ and basso continuo. The wide range of the vocal lines, as well as the sheer difficulty of the vocal and instrumental parts, indicate that both singers and instrumentalists in Meda’s convent were highly skilled.
Another fascinating recording (world premiere!) by the Cappella Artemisia conducted by Candace Smith, an ensemble of female vocal singers and instrumentalists specialized in the performance of Italian convent music of the 16th and 17th century. They already successfully issued a CD on Brilliant Classics: “Weep and rejoice” , music for the Holy Week.
More Less