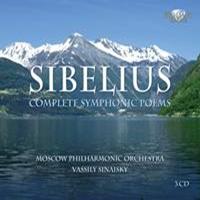 Nowhere in music are the landscape, myths, legends and politics of a composer’s country so inextricably hard-wired into his sound world as in the music of Jean Sibelius (1865-1957).
The vast pine forests, lakes and rivers of Finland, the midnight sun, the endless winter nights, the penetrating cold, and the brief warm summers combine, along with the epic national poem The Kalevala to provide a rich vein for Sibelius to exploit in his unique Symphonic Poems and his seven symphonies.
From the early En Saga of 1891, via Finlandia to the vast, shattering experience of Tapiola of 1926 his unique musical voice became the voice of the new Finnish nation emerging from centuries of domination by Sweden and Russia.
This 3CD set contains all the symphonic poems, including The Four Legends (The Swan of Tuonela is the second of these), the famous Finlandia, and the masterful Pohjola’s Daughter, the mysterious Oceanides and Luonnotar, and the final last symphonic work Tapiola. After completing this work, Sibelius lived another 31 years in musical silence, completing and destroying his 8th Symphony.

Other information:
- Recorded in 1991
- Next to his famous symphonies the great Finnish composer Jean Sibelius composed a great number of symphonic poems (middlesized one-movement symphonic works), often with a programmatic content, depicting Finnish sagas or fairy tales: Finlandia, The Swan of Tuonela, En Saga and many others.
- A complete recording of these immensely enjoyable and popular works by the great Russian conductor Vasilli Sinaisky and the Moscow State Symphonic Orchestra in its full glory.

Extra info on the performers:
- Vassily Sinaisky’s international career was launched in 1973 when he won the Gold Medal at the prestigious Karajan Competition in Berlin. His early work with Kirill Kondrashin at the Moscow Philharmonic and with Ilya Musin at the Leningrad Conservatoire provided him with an incomparable grounding. Soon after his success at the Karajan Competition, Sinaisky was appointed Chief Conductor of the Latvian National Symphony Orchestra, a post he held from 1976 to 1987. He then became Music Director and Principal Conductor of the Moscow Philharmonic, leading numerous high-profile projects with the Orchestra both in Russia and on tour around the world.
- Sinaisky additionally holds the positions of Principal Conductor of the Malmö Symphony Orchestra, Sweden and Chief Guest Conductor of the BBC Philharmonic. Memorable projects with the BBC Philharmonic have included the Shostakovich and his Heroes festival in 2006, tours to Europe and China, and annual appearances at the BBC Proms. With the Malmö Symphony Orchestra, Sinaisky has toured to the UK and to Amsterdam’s Concertgebouw, while recent projects have included performances of Elgar’s The Dream of Gerontius with the Danish Radio Choir in Malmö and Copenhagen. Sinaisky has also held the positions of Principal Guest Conductor of the Netherlands Philharmonic and Music Director of the Russian State Orchestra.
- On 21 September 2010 Vassily Sinaisky was formally announced as the new Music Director of the Bolshoi Theatre, Moscow.
More Less