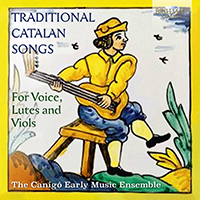 Through these songs we hear the voice of a nation - one of the oldest nations in Europe. In them is embodied the identity of the Catalan people through a popular expression of their national character. The lutenist William Waters has compiled almost 30 songs from Catalonia’s medieval and modern history and arranged them for an early-music ensemble. In spirit, we may listen to the album and join a group of troubadours, even if many of the songs themselves date from the Baroque and later periods.

Waters presents the songs in a variety of arrangements – for solo lute or a pair of lutes, for one or two bass violins with or without chordal accompaniment from the theorbo, and then for a trio of musiciansaccompanying a soprano. In them we find tales of love, jealousy, escape and murder, the raw material for graphically drawn music by composers up to de Falla, Gerhard and beyond. But there are also gentler numbers that evoke a pastoral mood and depict childhood and rural ways. There is even a harvest song, Els Segadors, which in time became a national anthem for Catalonia.

These stories are explained by brief but valuable contextual notes in the booklet, which also prints the texts of the songs in both Catalan and English translation. A previous Brilliant Classics album by William Waters revives the lute music of the 17th-century Silesian composer Esiaias Reusner (BC95242). The album was reviewed in glowing terms by the Italian Giornale della musica, praising Waters’ sensitive evocation of the ‘peace and tranquillity transmitted by Reusner’s music.’ Here he is joined by the members of a Catalan-based early music ensemble for a vividly presented sense of authenticity.

A unique collection of songs from Catalonia, a Spanish region rich in culture and with a strong identity, its origins going back to the Middle Ages, a period in which troubadours sang of love, war, nature, honor and betrayal.
The program contains songs for voice and ensemble, as well as arrangements of popular melodies for a diversity of instruments from the time of origin.
Sung by Marta Garcia Cadena (soprano) and instrumentalist William Waters, playing baroque lute, lyra violin, bass violin, baroque guitar and renaissance lute.
The extensive booklet notes include the original song texts and their English translation, as well as a description of each individual song.
More Less