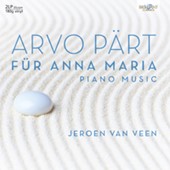 Jeroen van Veen brings us not only Arvo Pärt’s complete piano music, but also the complete Pärt ‘total immersion’ in versions of Für Alina which total nearly 50 minutes when laid end to end. Looking at this remarkable piece you wouldn’t expect it to have quite this much potential.

Sparsely printed on two pages, with about 15 bars and very few notes, this is music which invites meditative exploration. It represents an “extreme reduction of sound materials and a limitation to the essential: minimalism with maximum effect.” Jeroen van Veen keeps to the text, but takes the notes into different registers of the piano, creating some fascinating variations. It might be argued that we get too much of a good thing here, but I’d rather have two well-filled discs of deeply atmospheric playing than blank space, and with Van Veen’s sustained and introspective journey these are rewarding experiences in their own right.

Technically speaking we should really have started with the earlier works on CD 2, but I suspect the majority of listeners will play CD 1 the most. The Variationen zur Gesundung von Arinuschka are almost as sparing as Für Alina, teasing sonorities from sympathetically sounding strings and bringing deep expression again from a very few notes. If anything I would have preferred this a little more sustained from Van Veen, but it is a beautiful lyrical performance. There are some simple little pieces here which lay no real claims to being the greatest of art. Ukuaru valss is one such work, a little waltz which precedes the playful miniature Für Anna Maria which also appears in a slightly swifter version further on in the programme.

There are works by Pärt which are more familiar in one or other versions, and Pari Intervallo is probably better known on organ or one of the ensemble versions which have been recorded. It exists for solo piano or as here for two pianos – again, simple and restrained, but gorgeous and profoundly spiritual. Hymn to a Great City is again for two pianos and another strangely compelling work – little more than a procession of cadences, but with a call and answer feel which draws us in as would the stained glass windows of a great cathedral. CD 1 ends with two works with cello marked as bonus tracks, Fratres, perhaps best known with violin, and Spiegel im Spiegel. The deep piano sonorities inFratres are superb here, and with flageolet tones from the cello there are moments of real magic.Spiegel im Spiegel you will have heard as backing to many a cinematic moment but it remains a strikingly effective work of musical art, this version with cello very expressive and moving.

CD 2 introduces us to works written by Arvo Pärt before he entered the style of his best known pieces.Vier leichte Tanzstücke ‘musik für kindertheater’ is the earliest collection and a highly effective and entertaining quartet of incidental descriptive pieces. Pärt’s imagination is every bit as striking in the two neo-classical Sonatinas from 1959. These are by no means modernist in character, and as music ‘of its time’ live happily alongside contemporary influences such as Shostakovich. The Partita Op. 2 is more modernist but not frighteningly so, with technical echoes of the likes of Hindemith in itsFughetta, harmonic stresses in the Larghetto which betray distinctly romantic urges and a finalOstinato which has moments fighting to break out into something suspiciously jazzy. CD 2 concludes with another extensive and sublime ‘take’ on Für Alina.

In terms of completeness there is little competition for this two disc set. Ralph van Raat comes close with his Naxos disc 8.572525 (see review) which is superbly performed and recorded, keeps Für Alinato a compact 3:25 and includes the remarkable Lamentate for piano and orchestra. Which you will prefer depends on your taste for transformation, though any collection can comfortably accommodate both. Jeroen van Veen’s recording can stand alongside the best from any source, and this set is worthy of high praise in every regard.