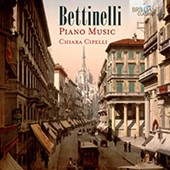 Bettinelli studied composition, conducting, piano, choral music and vocal polyphony at the Verdi Conservatory in Milan, where he later taught. His Composition classes there included Abbado, Muti, Pollini, Chailly, Bruno Canino and Uto Ughi. His virtues as a teacher have clouded his compositions. There are seven symphonies, three operas, choral works and chamber music.

Chiara Cipelli plays these piano pieces with an evident sympathy for their stylistic variety and contrasts; she seems totally in command of the music’s technical armoury. The ten years that divide the Preludio (1956) from the Suite agreste(1946) seem to have wrought a tectonic change. The Suite is not only tonal but a melodic delight. The little Preludio is refractory and dips liberally into atonality, Stravinskian asperity and chastening shivering cold. The five-movement Fantasia, from only a year before the Preludio, is from the same stratum. In fact, its Ritmico is titled (omaggio a Stravinsky). The movements are short apart from the deeply impressive and cruelly dank Notturno, which runs to 4:20 of morose tolling. The final Fugato (4:06) combines brisk patterned activity with tension and dissonance. The eighteen miniatures that make up Piccolo Pezzi (1941) are indeed small: some as short as 0:14 and the “longest” is 2:02. The date betrays the style, which is charming, poised, enchanting and picturesque yet not simplistic. In 1974 he completed his ten-piece sequence called Sintesi. These too are brief and the expressive language is what you might have expected from the date. It is no clever feint that two of the pieces are dedicated to Dallapiccola and Petrassi.

Brilliant Classics and Cipelli (who writes the helpful notes with Peter Quantril) have done well to introduce us to Bettinelli. My first expectations, sloppily arrived at, were that this composer was going to be another forgotten Italian late-romantic. I was soon to learn otherwise from these well-recorded and -played accounts. Bettinelli’s piano catalogue sports melodic effusions without being garrulous as well as tungsten tough writing that yet avoids the feral or the atrabilious. If you would like to track more of Bettinelli’s music Naxos have made the way clear.