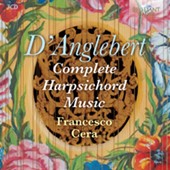 In the late 16th and early 17th centuries the lute was the leading instrument in France. During the 17th century this role was gradually taken over by the harpsichord. The key figure in the emancipation of the harpsichord was Jacques Champion de Chambonnières (1601/02 - 1672), who is considered the father of the French harpsichord school. He played a key role in the rise to fame of Louis Couperin, and Jean-Henry d'Anglebert is assumed to have been one of his pupils. This could explain why d'Anglebert wrote a Tombeau de M. de Chambonnières, which closes his Suite in D.

D'Anglebert was born in Bar-le-Duc, a village west of Nancy. Nothing is known about his early musical education and we also don't know when he came to Paris. Here his first official position was that of organist to the Jacobins in the rue Saint-Honoré (1660). Through marriage he became related to another organist, François Roberday, who used a theme by d'Anglebert in his Fugues et Caprices. In 1662 he became ordinaire de la musique de la chambre du roi pour le clavecin. The only publication of his keyboard works was the Pièces de clavecin - printed in 1689. These were dedicated to the Princesse de Conti (legitimated daughter of Louis XIV and Mlle de la Vallière), for whom he composed most of his harpsichord music.
The harpsichord book includes four suites of different length. The suites in G and in d minor comprise twelve and thirteen pieces respectively whereas the other suites have only seven (Suite in D) or eight (Suite in g minor). To these four suites d'Anglebert added transcriptions of movements from operas by Lully as well as four arrangements of folk songs (air ancien or vaudeville).
Three of the four suites open with a prélude non mesuré. The preludes of the first two suites are rather short, the prelude of the Suite in d minor is about twice as long. The Suite in G includes three courantes; the first has a double. Chaconnes and passacailles were a fixed part of French music, and that includes Lully's operas. This suite includes a chaconne rondeau. That is also the case with the Suite in D which ends with the above-mentioned tombeau. The Suite in g minor ends with a passacaille which is its longest movement. The Suite in d minor has two courantes - the first comes with a double - and two sarabandes, one of them with the addition grave. The suite ends with a set of variations on the Folia (Les Folies d'Espagne) which inspired so many composers of the 17th and 18th centuries.
The fact that d'Anglebert was associated with the court explains that he transcribed a number of movements from operas by Lully who was in the service of Louis XIV from 1651 until his death in 1687. However, these pieces also bear witness to the composer's admiration for Lully. No fewer than 16 transcriptions are included in the Pièces de clavecin. Not every piece explicitly mentions the name of the opera from which it is taken. As Lully's operas are hardly standard repertoire today - Armide is one of the best-known stage works - they are also not immediately recognizable.
This release is presented as d'Anglebert's "Complete Harpsichord Music". That is not entirely true. A number of pieces from his pen have been preserved in manuscript. Cera plays only four of them (or five, if we take the gaillarde and its double as two): those which he composed "independently", as the translation of his liner-notes say. By that he means that these four are original works, in contrast to the other items. Some of those are transcriptions of lute pieces by composers of previous generations; others are doubles or variations which d'Anglebert composed for pieces by other composers, such as Chambonnières, Pinel and Louis Couperin. It is a little disappointing that Cera decided not to include them in his recording. Fortunately they are available in a fine interpretation from Paola Erdas (Arcana, 2006). The Pièces de clavecin end with five organ pieces. These are also not included here, despite the fact that Cera is also a renowned organist.
That said, although d'Anglebert's oeuvre is well represented on disc this is the first time his almost complete output is available in one single set and by one interpreter. This is a fitting tribute to one of the great exponents of the French harpsichord school. Its quality is reflected by the fact that the collection was twice reprinted after his death, in 1703 and 1704. A large number of copies have survived, another token of the fact that they were highly appreciated. One of the admirers was Johann Sebastian Bach: he made a copy of d'Anglebert's keyboard pieces which clearly influenced his own development as a composer.
Francesco Cera plays a copy of an instrument of 1691, one of the three extant harpsichords of Vincent Tibaut. It is a splendid instrument which is perfectly suited to this music. Cera is one of Italy's most prominent keyboard players who has made many recordings on harpsichord and organ. This is the first time I have heard him in French music. I have greatly enjoyed these performances: his playing is superb. He has a good feeling for the refinement and elegance of d'Anglebert's music. This is chamber music to be played not on the concert platform but in the intimacy of the home. That even goes for the Lully transcriptions: in the Passacaille d'Armide he underlines its theatrical origin - without exaggeration - but he mostly treats them as true harpsichord pieces in their own right. If I had to choose some highlights I would take the sarabande grave from the Suite in d minor, a superior piece here given a brilliant performance, and the passacaille which closes the Suite in g minor. Among the opera transcriptions the Air d'Apollon du Triomphe de l'Amour stands out. Another gem is the gavotte Où estes vous allé, the transcription of a vaudeville with a beautiful melody.
The historical importance of d'Anglebert, the quality of his oeuvre and the splendid interpretation by Francesco Cera justify the accolade of Recording of the Month.
Johan van Veen
www.musica-dei-donum.org
twitter.com/johanvanveen