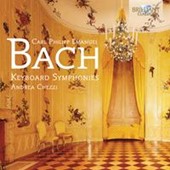 In the 18th and 19th centuries the keyboard - first the harpsichord, later the piano - was the counterpart of the CD player in our own times. It was used to perform large-scale orchestral works, such as symphonies and solo concertos, and arias from vocal pieces at home. Many transcriptions were made, which were sometimes printed, but often circulated in manuscript. Today such transcriptions are not played that often. I see two reasons: if one knows the original, one realises that a transcription is also a reduction and one misses elements which are impossible to translate to the keyboard. The second reason is that today we have the opportunity to hear the originals on disc and in public concerts. If one can hear the original, why should one play a transcription?

Some transcriptions have become quite famous and are still played. Among them are Johann Sebastian Bach's transcriptions of Italian concertos by Vivaldi and others, William Babell's arrangements of arias from Handel's operas and Liszt's transcriptions of Beethoven's symphonies. The present disc offers transcriptions of four symphonies by Carl Philipp Emanuel Bach which I have never heard before - I wasn't even aware of their existence. It is not surprising that Bach's symphonies were arranged for keyboard as he was one of the most fashionable composers of his time and his symphonies are in many ways expressions of his very personal style.

It is not totally clear who the authors of these transcriptions are. The Symphony in G was transcribed by Bach himself, but the Symphony in F was published by Breitkopf in 1761 and may also be from the composer's pen or - according to Andrea Chezzi in his liner-notes - "at least authorised by him". "The scores of the last two symphonies survive within a manuscript, preserved in Berlin, from the second half of the 18th century." This is a rather obscure statement: does this refer to the originals or to the arrangements? The arrangements of the Symphonies in G and in F are included in CPE's worklist in New Grove, but there is no reference to a transcription of the Symphony in D nor does it have a number in the two catalogues of his works (Wotquenne and Helm). The transcription of the Symphony in e minorhas been included in both catalogues, but in New Grove it has the addition "unrealized". Does this mean that these transcriptions are from Chezzi's pen? If so, would he really state that "the symphony in D major Wq176 sounds like a well-balanced harpsichord piece in this transcription"? I hope not.

So maybe we have to assume that these two transcriptions are also from the 18th century. These pieces are interesting because they give us some idea of a practice which was widespread at that time. It seems to me that for today's keyboard players this is still interesting stuff to be part of their repertoire. If Johann Sebastian's transcriptions are good enough to be performed, why not these arrangements of his son's symphonies? Not that there is no difference. One of the features of CPE's orchestral works is the use of dynamic contrast, and this is not so easy to realise on a keyboard, even if it has two manuals as is the case with the harpsichord Andrea Chezzi plays. He states that in particular the "richness of expression" of the Symphony in e minor "puts a strain on the possibilities of the harpsichord". This piece comes off best here. The other symphonies are well played, but in them we often hear many repetitions of the same notes in the upper part. In an orchestral performance that is hardly a problem as instruments - mostly strings - can differentiate between them through variation in colour and dynamics. That is impossible on the harpsichord. Variation in articulation seems the only way to create some differentiation here, and that is something I missed. In the first three symphonies I enjoyed the slow movements most.

Chezzi plays a copy of the Goermans/Taskin harpsichord of 1764/1783 in the Russell Collection in Edinburgh. It is a nice instrument, but in this repertoire I would have preferred a German example.

All in all, this is an interesting and musically mostly rewarding disc which is well worth investigating. It sheds light on a barely-known aspect of CPE Bach's oeuvre. The short playing time is disappointing, but as Brilliant Classics discs are sold at budget price this is probably not too much of a problem.