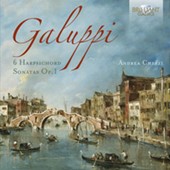 In the mid-18th century Baldassare Galuppi was one of the most fashionable Italian composers. He was especially known for his music for the stage but he contributed to every genre. He studied counterpoint and organ with Antonio Lotti and at the same time acted as harpsichordist in opera houses. As such he earned quite a reputation. Throughout his career he also composed keyboard music; his output in this genre has not been fully catalogued as yet.

Galuppi's reputation explains why his compositions, including his keyboard works, have been preserved in many archives and libraries across Europe. Most of his works for keyboard were never printed. The collection of six sonatas which is the subject of the present disc was printed as his op. 1 in London in 1756. Four years later it was reprinted which attests to the popularity of Galuppi's music. One of the features of his keyboard works is that they appear in various forms: often the movements are ordered differently from one source to the other, and sometimes movements appear in one source which are absent in another. Moreover, sometimes the music itself also shows differences. Franco Rossi, in his liner-notes, concludes that "the publication of Galuppi's complete keyboard works cannot logically claim to be a critical edition".

The op. 1 was published by Walsh. It could well be that he was responsible for the edition and that Galuppi had little if anything to do with this. Walsh may have put together what he could lay his hands on. This could explain why the sonatas are so different in texture. The Sonata IV in D, for instance, comprises four movements but the others mostly just two. The Sonata II in d minor includes only one movement. The disc ends with the Sonata in G which is actually only an andantino. It was included in the second edition of the op. 1 which came from the press in 1760.

These sonatas are written in the galant idiom which was so popular across Europe in the mid-eighteenth century, especially among amateurs. Those were the people for whom this kind of music was written. At times one notices theatrical traits reminding us that Galuppi was a celebrated composer of music for the stage. An example is the giga which closes the Sonata IV. Charles Burney met him on his travels and was full of praise, calling him a "good contrapuntist". However, little of that quality comes to the fore in his keyboard works. They reflect the fashion of the time in that they are mostly written in two parts, with the right hand taking the melody and the left hand being reduced to the role of accompaniment.

The British scholar Michael Talbot once stated that Galuppi's keyboard music seems not to be written for a specific kind of keyboard instrument. They have been recorded on harpsichord, clavichord, fortepiano and organ. Andrea Chezzi here chose a copy of a French type of harpsichord, built by Goermans - a French harpsichord maker of Flemish origin - and later extended by Taskin. The original is part of the renowned Russell Collection in Edinburgh. The fact that Galuppi's music circulated in manuscript across Europe allows for many different choices of keyboard.

Chezzi regularly changes manuals creating a kind of dynamic contrast. As I didn't have access to the scores I could not check whether they include any dynamic indications. I have only seen a modern print of the Sonata III in a minor and in that case I didn't see anything of that sort. That doesn't mean Chezzi is wrong in using the two manuals in contrast. In fact, it made much sense and it sounded fully natural to my ears.

These works will not shake the music world. They should however be savoured for what they are intended to be: good entertainment. Chezzi has found just the right approach: he doesn't try to give the music weight by adding virtuosic ornamentation. His playing is technically accomplished and stylish and he fully explores the features of these sonatas. Harpsichord lovers will certainly enjoy this disc.