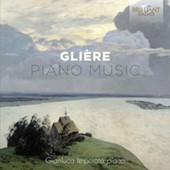 While hardly unique - see Goldstone on Divine Art - this is a handy and very competent guide to the solo piano music of Russian composer Reinhold Gliere.

His dates place him uncomfortably straddling the Imperial and Soviet eras. His late-romantic nationalist style locates him on the nationalist delta flowing out into the twentieth century's uncertainties. There are some similarities with Glazunov, who left the USSR while Gliere stayed on until the end - his end. As Luca Segalla's note (fluently translated by the admirable Kate Singleton) says, Gliere's music smacks fragrantly of the Decadence of Scriabin. That said, there are also moments when Rachmaninov and Mussorgsky seem to be grabbing at Gliere's coat-tails.

The 25 Preludes vary in duration from 0.48 to 3.42 with many less than two minutes long. They date, along with most of the music here, from the 1900s. The only exception is the Two Piano Pieces op. 55 from 1955. The Preludes do not lack for grandeur but there's also quick-fire play, as in the Prelude No. 3. The C sharp minor work has plenty of burnished and smouldering rhetoric. The Fifth drifts in easy slow-flowing ecstasy between Scriabin, Chopin and MacDowell. The morosely pounding heavy-leaf-fall of No. 6 contrasts with the capricious carillons of No. 7. The supernatural No. 8 is burdened with threat which continues in the leathery pterosaur wing-beat flight of Nos. 10, 12 and the concluding 25. Nos. 9, 13 and 19 seem to reference the slow movement of the limpid and hyper-romantic Scriabin Piano Concerto. This 'voice' continues but with a vintage Tchaikovskian accent in Nos. 11 and 15. A Mussorgskian violence hammers away unrelentingly in No. 17. Epic romance thunders magnificently in Nos. 20-21 and 23-24 in which saturated nobility is also in the blend.

The Op. 16 Romance seems to be the earliest piece here. It has a simpler message than the Preludes - romantic without their emotional darkness and convolution. The dignified simplicity continues in the four Kinderstücke with their German titles. Gliere was no stranger to Russian Eastern exotica as his operas Shakh-Senem and Gyulsara would appear to attest; also his Heroic March for the Buryiat-Mongolian ASSRand Holiday at Ferghana (review). This connection can be subtly heard in Lied aus dem Osten (tr.30). Gaiamente from the 12 Sketches op. 47 is an unremittingly cheery little piece while the grumbling undertow of the Agitato makes an adroit contrast. Then skip forward half a century to the two Op. 99 pieces. The first is an Impromptu for the left hand. It is again beautifully dignified and yet confidently self aware. Much the same can be said of the charmer that is Melodie. Nothing has changed in Gliere's creativity since the 1900s. He can still turn an opulent phrase and warm the heart.

Gianluca Imperato seems in sympathy with this music and the engineers cloak his pianism in a warm aura.

The liner-notes also appear in Italian (the original) and German.

This is a bargain price entry from Brilliant Classics. On this showing I hope that Gianluca Imperato will return to Gliere and, together with Brilliant, produce a set of the complete Gliere piano music.