Musicweb International "Record of the Month" 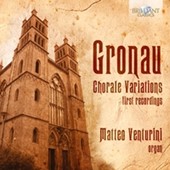 The name of Daniel Magnus Gronau is probably only familiar to the most knowledgeable of organ aficionados. His organ works are seldom performed and recorded, although Brilliant Classics wrongly claims that these are "first recordings". At least two of the chorale variations are otherwise available.

These five works are all we have from Gronau's pen. The article on the composer in New Grove mentions four books with keyboard music all of which have disappeared. A German musicologist studied them in the 1920s, but it seems that the manuscripts were destroyed during the bombing of Danzig in 1945.

In this city - now Gdansk in Poland - Gronau worked most of his life. There is very little biographical information about him. We don't know where or when he was born or who his teachers were. We are also unaware whether he was active elsewhere before his time in Danzig. From the Middle Ages the city had a rich musical life, due to the presence of many outstanding performing musicians and composers. Some famous names are associated with the city, such as Kaspar Förster (a pupil of Carissimi), Johann Valentin Meder, the violinist Carlo Farina and the lutist Esaias Reusner. Among the organists who worked there were Paul Siefert and Ewaldt Hintz (a pupil of Froberger). Gronau played in two of the main churches, first St Mary's, and then St John's.

Given the loss of the largest part of his oeuvre it is impossible to arrive at a fair assessment of his style. The extant chorale variations suggest that he was strongly under influence of the North German organ school. The extensive treatment of chorales in this manner points in that direction, and so does the virtuosic character of several variations. Another specific feature of the North German organ school is the virtuosic treatment of the pedal parts. The same is the case in Gronau's variations, and especially inEin feste Burg and Was Gott tut both of which include a variation à Pedale solo. Most also include one variation for manuals only. Four of the five sets open with an extensive treatment of the chorale melody - every line of the hymn is used as the subject of a fugue. Es wird schier der letzte Tag and Gott has das Evangelium are notable for the inclusion of a variation in which specifically three manuals are required. In those cases the right hand plays on two manuals whereas the left and the pedal realise a kind of basso continuo accompaniment.

From a performance practice perspective Gronau's indications regarding registration are highly interesting. It is quite possible that they are more than just an expression of his personal preferences and give us a clue as to the registration habits of his time. One especially important aspect is the fact that Gronau doesn't indicate any changes to registration within a single variation. Today many representatives of historical performance practice often add or switch off stops during a piece or a single section. This is a matter of debate among organists.

In his liner-notes Matteo Venturini mentions several aspects of registration on the basis of Gronau's indications. In New Grove a couple more are mentioned. It is a little unfortunate that not all of these can be realized on the organ he chose for his recording. The last variation of Mitten wir im Leben sindhas the indication con Tremulo. This refers to the tremulant, an organ stop which was present in most organs from the 16th century onwards. This organ omits such a stop, and has no alternative which comes close. That said, this organ, built in 2005 by Glauco Ghilardi and inspired by North German baroque instruments, is very fine and well suited to the repertoire.

Some of these variations may have been recorded before. This is the first disc entirely devoted to the extant oeuvre of a composer who was apparently a brilliant organist. These sets of variations are very compelling and will appeal not only to diehard organ aficionados. Ein feste Burg is Gronau's best-known work, and that is easy to explain. Apart from the fine melody by Martin Luther, Gronau's treatment of the material shows great imagination and a mastery of the possibilities of the organ. The fourth variation for pedal solo is breathtaking. Matteo Venturini's performances leave nothing to be desired. They are technically impressive, but also stylistically convincing. His phrasing and articulation are very good, and his performances really breathe.

Given of the importance of the repertoire and the quality of the performances this disc deserves to be Recording of the Month.