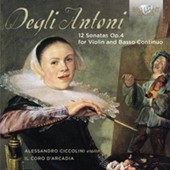 Pietro Degli Antoni is one of those composers many music lovers will never have heard of but who was quite famous in his own time. He was born and died in Bologna where he worked all his life. In the 17th century Bologna was an important centre of music in which various developments were initiated which had a lasting influence on the course of music history. One of these was the birth of the cello as a solo instrument, with Domenico Gabrielli, Giuseppe Maria Jacchini and Giovanni Battista Vitali as its main exponents. It was especially under Maurizio Cazzati in his capacity as maestro di cappella that the ensemble of the basilica of San Petronio was extended and the trumpet took its place in instrumental music. Giuseppe Torelli was one of the main composers who contributed to this genre. He also stood at the cradle of the concerto grosso and the violin concerto. [Johan Van Veen on MusicWeb International]