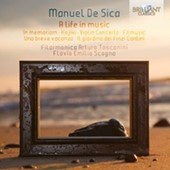 Manuel De Sica, son of the famous Italian film director and actor, Vittorio De Sica, has been responsible for some eighty film scores, composed between 1968 and 2012. He describes his early influences as “Bruno Maderna and Henry Mancini” but also “two other outstanding figures of 20th century music: Alban Berg and Béla Bartók.” Bernard Herrmann’s ‘hand’ is felt too in a number of places on this album.

In Memoriam is a brief piece dedicated to the victims of the Abruzzo and Emilia earthquakes in 2009 and 2012. This ‘ode of remembrance’ chorale, as De Sica describes it, is a minimalist composition supposedly inspired by the compositions of Bernard Herrmann. Echoes of that composer’s Psycho and Vertigo scores are apparent.

Kojiki is a most attractive, accessible concerto for harp and strings, sentimentally romantic and atmospheric, nodding slightly towards Japanese ethnicity. It has some gorgeous writing for the soloist. The work’s inspiration was the bombing of Pearl Harbour in 1941. The narrative of Kojiki tells of the childhood, adolescence and death of a kamikaze pilot who might have participated in the bombing. The opening Prelude possesses an iridescent beauty. The central Epitaph is mournful and darkly tragic while the concluding consoling Dance “describes his ascent to the empyrean world of his ancestors”

The deeply-felt, meditative Violin Concerto’s first Adagio, quasi andante is elegiac and a little reminiscent of Vaughan Williams’s The Lark Ascending. The Mosso misterioso movement that follows is agitated and mournful and is followed by a Meditavio, con intensità movement that can be said to be emotionally linked to its predecessor. It begins with an extended cadenza which the composer describes as a commemoration dedicated to the victims of war in the Middle East. The work is rounded off with another Adagio very much in the mood of the opening movement.

Manuel De Sica describes his little piece for viola and strings, the theme for his father’s 1973 film, Una breve vacanza, as “probably the most beautiful melody I have ever written for the movies.” Indeed as performed here by Anna Serova it does touch the heart.

On a lighter note, Filmusic for piano and orchestra is delightful. Its sparkling opening movement is Russian-inspired and it finishes with a gleeful whirling tarantella true to the composer’s father’s Neapolitan origins. In between is a brief romantic meditation, delicate and quite lovely, and for me the best thing on this CD. Carbonara and the Filarmonica Arturo Toscanini clearly relish this work.

Finally the Oscar-nominated film music for the Il giardino dei Finzi Contini, written when the composer was in his early twenties. It was directed by his father. It tells of a Jewish family living in Ferrara, enjoying tennis in contentment in their secluded garden as the tide of fascism rises around them ultimately to engulf them. All this and a torpid atmosphere pervade this score. The influence of Henry Mancini is strongly felt.

An interesting, lovingly performed programme of film and concert music by a contemporary Italian composer.

go to the productpage here