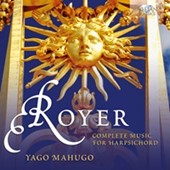 Joseph-Nicolas-Pancrace Royer is a representative of the French harpsichord school of the mid-18th century. He has been a little overshadowed by his more famous contemporaries, such as Rameau, Duphly and Balbastre. In particular the latter two published their main books with pièces de clavecin at about the same time as Royer. His first book was printed in 1746; according to New Grove a number of other harpsichord pieces are lost.

The present disc includes the only extant piece which has been preserved in manuscript, La Chasse de Zaïde. It is a transcription of an instrumental movement from Royer's Zaïde, a ballet-héroïque which was premiered in 1739. It is one of Royer's theatre works.

Today Royer is almost exclusively known as a composer of keyboard music, but he wrote several works for the theatre. These are hardly known; to my knowledge only Le pouvoir de l'amour is available on disc, the result of a live performance under the auspices of the Oberlin Conservatory of Music (2002). Several of his harpsichord pieces are transcriptions of movements from his operas, and they suggest that he was a skilled composer in this department.

In 1734 Royer was appointed maître de musique des enfants de France, which meant that he was responsible for the musical education of the children of King Louis XV. Several of them were musically gifted, and the first book of harpsichord pieces was dedicated to the two daughters.

These pieces document the changes in the aesthetics of the time. Character pieces as we know them from Couperin's ordres are rare and so are dances. Those which are included in this book have little in common with the older types. At the time of publication the form of the rondeau became increasingly popular, in instrumental chamber music as well as in keyboard music. Seven of the fifteen items arerondeaux. They are grouped according to keys, but there are no indications that they should be played as suites. In his preface Royer wrote: "The pieces are open to great variety, passing from the tender to the lively, from the simple to the tumultuous, often successively within the same piece".

In his transcriptions of extracts from his own operas Royer followed in the footsteps of Rameau. His colleague Balbastre also often played opera transcriptions which were never published and are preserved in manuscript. La Zaïde, La Marche des Scythes and La Chasse de Zaïde are arrangements of instrumental items from Zaïde. Les Matelots, Tambourin I and the Allemande are based on music from Le pouvoir de l'amour, a ballet héroïque, first performed in 1743. Most of them belong to the lively or even 'tumultuous' genre, but La Zaïde is a specimen of the 'tender' genre.

'Tender' is also a good description of pieces such as La Sensible, L'Aimable and Les Tendres Sentiments. 'Tumultuous' is Le Vertigo, meaning 'the capricious', characterised by heavy and frequently repeated chords. Closest to a traditional character piece is La Remouleuse, probably depicting a knife grinder, which would explain the repeated motif. La Bagatelle is a restless piece with short, pungent chords.

The Spanish harpsichordist Yago Mahugo delivers good performances. I especially liked the 'tender' and 'sensible' items. These are performed with elegance and refinement. In the more theatrical pieces I slightly prefer Christophe Rousset who recorded Royer's harpsichord book in 2007 (Ambroisie AM 151). His performances are more dramatic and stronger in contrast, for instance in Le Vertigo. The differences are partly due to the instruments these performers use. It seems to me that Rousset's Goujon/Swanen harpsichord (1st half 18th century/1784) is better suited to this repertoire than Mahugo's copy of a Ruckers (1638). In the quieter pieces the differences are less prominent. However, if you purchase his recording you won't regret it. Considering that Royer's music is not that well known this disc is most welcome. Harpsichord aficionados will be especially interested to hear La Chasse de Zaïde which was omitted from Rousset's recording.