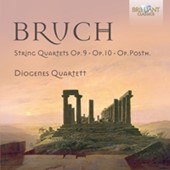 The increasing popularity of the music of Max Bruch is going some way to soften the view that only his famous G minor Violin Concerto deserves acclaim. In the 1980s, the missing score of a late String Quintet in E flat major from around 1918 emerged from private hands and is now available in a published edition. This release contains the world première recording another rediscovered chamber work. I was aware that Bruch was a precocious child composer and wrote an early Septet in 1849 when aged only 11, but I didn’t know he had composed a String Quartet in 1852 when he was 14. The C minor Quartet included in this album was discovered as recently as 2013 in the archives of the Mozart-Foundation in Frankfurt. Previously thought lost, this was the composition Bruch used to support his application for the valuable award of the Mozart-Foundation scholarship. We are informed in the accompanying notes, written by Ulrike Kienzle and translated by Jan Tazelaar, that the teenage Bruch had inscribed the score with the Latin motto Numquam retro sum – meaning ‘Never backwards’.

Also included on the release are Bruch’s two numbered String Quartets in C minor, Op. 9 and E major, Op. 10 the only chamber works that were published in his lifetime. As pointed out in the booklet notes, in the 1852 quartet the melody of the Adagio is identical and the Scherzo is mainly the same as the opus 9 work. All three works receive an elevated level of passionate musicianship from the Diogenes Quartett, including a palpable sense of enthusiasm. Striking is its concern for instrumental colour, immaculate ensemble and intonation. In the brisk outside Allegro movements, the Diogenes provide captivating performances that radiate joyful, high spirits. In the warmly tender Andante/Adagios, the playing has a loving, restrained expression and the blustery Scherzi feel buoyant, full of vibrant energy.

Recorded at Himmelfahrtskirche, Munich, the recording team for Brilliant Classics has provided close sound, vibrantly clear with an ideal balance between each instrument. There are several recordings of the two numbered quartets, none of which I know. Probably the best known is from the Mannheimer Streichquartett recorded in 1996/97 on the CPO label. Another recording that received praise is from the ISOS Quartett, recorded in 1997 on Koch-Schwann.

No one would contend that these are the greatest works to enter the string quartet catalogue. Nevertheless, so engagingly played and well recorded, these three quartets on Brilliant Classics present a wonderful opportunity to trace the very early development, prior to and during his formal studies, of this much loved composer.