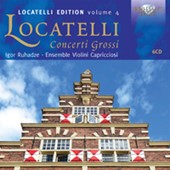 I first came to the music of Locatelli many years ago when I had a recording of his Concerti Grossi Op. 1 No. 8 on a Philips LP of Christmas Concertos. That album also included works by his teacher, Corelli, as well as by Manfredini and Torelli and all performed by I Musici. I greatly enjoyed that recording and it led me to investigate further the music of these four luminaries of the Italian baroque music scene.

Locatelli was born in Bergamo, where he became, at an early age, a violinist in the Church of Santa Maria Maggiore. He left for Rome when he was only 16 to further his studies and opportunities. It was in Rome that he is believed to have studied with Arcangelo Corelli. It was also in Rome, after a period which saw him perform as a violin virtuoso in a number of ensembles, that he composed his 12 Concerti Grossi Op. 1. Between 1723 and 1728 Locatelli travelled through Italy and Germany on a kind of musical grand tour, spending time performing at various courts. In 1729 he finally settled in Amsterdam, where his music was first published, and where he played amongst the wealthy mature musicians. He was reportedly frightened that a professional musician might learn and copy his style, and sold violin strings from his house. Despite this he was one of the highest paid musicians of the day.

Locatelli’s Op. 1 remains his most popular work with a number of fine recordings; my personal favourite being the recording by The Raglan Baroque Players on Hyperion (CDD22066). I find this new recording to be very good, and a strong challenger to the Raglan who, for me, overall have the slightest of edges over Igor Ruhadze and his ensemble.

In the Op. 4 Concerti, which Locatelli divided into six Introduttioni teatrali (six theatrical Introductions) and six Concerti Grossi, this new recording is again up against the Raglan’s excellent recording (CDA67041/2, reissued as CDD22064 - review). However here the Ensemble Violini Capricciosi is every bit as good as the players on the Hyperion disc. I find it very difficult to choose between the two.

The group of Six Concerti Grossi, or Four-Part Concerti Op. 7 is for me the crowning glory of this set. I know these works through the 1995 recording by the Carl Philipp Emanuel Bach Chamber Orchestra and Hartmut Haenchen for Berlin Classics (0011332), this is now old and somewhat laboured in comparison with this new recording which not only sounds bright and lively but also more committed in performance. This can clearly be seen in the sixth and final concerto, with its title Il Pianto d’Arianna, where the playing in the slower more sorrowful sections, has a greater depth of meaning in this new recording. This sense of sorrow is carried over into the excellent recording of Sinfonia Funebre, which is sadly forgotten in the booklet notes.

The playing throughout is at least very good and for the larger part excellent, and this is all captured in wonderful sound. The booklet is basic with the notes being brief; they could be a bit more informative. These recordings also feature in the 21 CD Brilliant Classics set of the Locatelli ‘Complete Edition’ (94358).