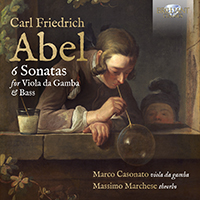 Carl Friedrich Abel capitalised on a musical pedigree with strong links to the Bach family. Abel’s father, Christian Friedrich, had been the chamber cello and viol player in Cöthen where J.S. Bach was appointed Capellmeister, and the two developed a close professional and personal relationship. When Abel Sr died in 1737, Carl Friedrich was sent to live with the Bach family, who had by then moved to Leipzig. There, he had direct access to the grand master of invention and composition, and from him he learned the skills he would use to dazzle audiences in a career of improvised performances on the viola da gamba and harpsichord.

From 1763 Abel shared a house in London with Johann Christian Bach (whom he had known in Leipzig as a young man) and together they ran the Wednesday Evening Concerts at Carlisle House in Soho Square, the forerunner to the more celebrated Bach–Abel Concerts in Hanover Square. Abel’s Six Sonatas (WK 141–146) and the four solos recorded here date from the 1770s, when this pioneering concert subscription series was at its peak.

Relatively straightforward pieces, the Sonatas were written to attract enthusiastic amateurs of relatively modest ability on the instrument. While his aim may have been to entertain, Abel invested all his considerable melodic talents into these compositions. Taking inspiration from reports of Abel improvising and decorating in performance, the artists have elected to repeat the slow movements in ornamented versions. The continuo element of the sonatas is also open to interpretation; the artists’ choice of theorbo was prompted by the historical idea that the instrument was still in fashion in late-18th-century London, even if unusual, and that aesthetically it is particularly suited to the intimate dimension of this music.

Of the four solos, three come from the ‘Drexel
Manuscript’ of 27 varied solo viol pieces. They are much more demanding than the sonatas, containing wide leaps, lively bowings, intricate fingerings and chords and double-stops. The last solo piece, drawn from the Pembroke Manuscript held in the British Library, is an arrangement of Sarastro’s aria ‘In diesen heil‘gen Hallen’ from Mozart‘s Die Zauberflöte. The arrangement asserts Abel’s poignant connection with Mozart: the young Amadeus copied and studied Abel’s symphonies during his brief stay in London as a child.

Carl Friedrich Abel (1723-1787) was born in Köthen, a small German city, where his father, Christian Ferdinand Abel, had worked for years as the principal viola da gamba and cello player in the court orchestra. In 1723 Abel senior became director of the orchestra, when the previous director, Johann Sebastian Bach, moved to Leipzig. The young Abel later boarded at St. Thomas School, Leipzig, where he was taught by Bach. On Bach's recommendation in 1748 he was able to join Johann Adolph Hasse's court orchestra at Dresden, where he remained for fifteen years. After that he went to England and became chamber-musician to Queen Charlotte. In 1762, Johann Christian Bach, the eleventh son of J.S. Bach, joined him in London, and the friendship between him and Abel led, in 1764 or 1765, to the establishment of the famous Bach-Abel concerts, England's first subscription concerts. In those concerts, many celebrated guest artists appeared, and many works of Haydn received their first English performance.
Abel was one of the last and greatest virtuosos on the viola da gamba, an instrument whose popularity quickly declined towards the end of the 18th century. This new recording presents The Six Sonatas for viola da gamba and B.C., written to attract enthusiastic amateurs of relatively modest ability: pleasing and attractive music, indulging in charming cantabile melodies.
Marco Casonato is one of Italy’s foremost players of the viola da gamba. His discography includes Dowland’s Lachrimae (for Brilliant Classics), Luigi Rossi’s Orfeo and Monteverdi’s Vespers (Glossa). He plays a copy of a Jacob Steiner six-stringed viol. “As one of the best professional players in Italy on the lute and theorbo.’ Jakob Lindberg.” Massimo Marchese plays the theorbo, he successfully recorded for Brilliant Classics works by Joachim van den Hove and De Visée.

Other information:
Recorded August 2021 in Mombello Monferrato (Alessandria), Italy
Booklet in English contains a composer biography by period flautist Georgia Browne, notes on the works by the gambist, Marco Casonato, and biographies of both performers.
More Less