Home > Catalogue > Andriessen: The Four Chorals and other Organ Music

Andriessen: The Four Chorals and other Organ Music 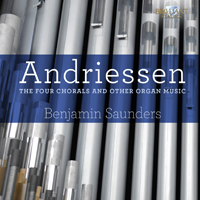 In the booklet to this CD of otherwise largely unavailable music, the composer Louis Andriessen remembers his father Hendrik (1892-1981). "Certainly due to his Catholic background, my father’s grand love for the French culture was of ultimate importance to his development as a composer… It comes as no surprise that he preferred French Romantic organs... My father criticised German Romanticism: “They composed in excitement or intoxication, throwing masses of tears around.” And so on. He could be sharp, but he was also very elegant and witty. He was a beloved man, as a father, as a teacher, and as an organist. His improvisations in the Cathedral after the High Mass were renowned. People were known to rush from their (Protestant) churches to the Cathedral to hear him play."

We may hear all these characteristics and more in his four Chorals, undoubtedly influenced by the works of the same name
by César Franck, as they wind through intricately chromatic rhapsodising, finally to reveal the power of a late-Romantic, Cavaille-Coll-style instrument in full. To one unfamiliar with the Four Chorals, the first two sound as though they might almost have been lost compositions of Franck, whilst the latter two speak in a new language that belongs distinctively to Andriessen.

The Theme and Variations is perhaps his best-known work for his instrument, the theme launched in formal Baroque splendour and then pursuing artful imitation of earlier models from the French and Italian schools without ever sounding remotely like Couperin or de Grigny, for example.

Hendrik Andriessen (1892-1981) was one of the most important Dutch composers of the 20th century. Born into a family of church musicians he became the organist of the churches in Haarlem and Utrecht, and held several prominent positions in Dutch musical life. One of his highly gifted children is Louis Andriessen, the famous avant-garde composer.
Andriessen’s organ works are firmly rooted in his Roman-Catholic faith and its church music tradition. His monumental Chorales are modelled on the Chorales by César Franck: the grand symphonic conception, the spiritual depth and the harmonic language.
Performed by Benjamin Saunders on the magnificent Grand Organ of Leeds Cathedral, perfectly suited to the large scale of these visionary works.
Booklet contains liner notes by the artist, and the specifications of the organ.
More Less