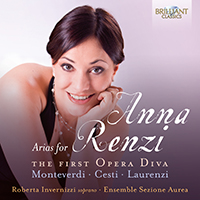 A homage from one superb Italian soprano to her forebear, the first ‘opera diva’.

As the most celebrated singer in Venice during the 1640s, Anna Renzi created roles in operas by the great dramatists of the day including Ottavia in L’incoronazione di Poppea. As outlined by the booklet’s detailed essay on Renzi’s life and career, her career was not very long but dazzling. It centred round the many Venetian theatres and prestigious tours that took her to Florence, Genoa and Innsbruck: from 1640, when she made her debut in Rome, her home city, in an opera written by her alleged teacher Filiberto Laurenzi staged at the French embassy in Palazzo Pallavicini-Rospigliosi, to 1657 in Le fortune di Rodope e Damira, set to music by Pietro Andrea Ziani, at Teatro Sant’Aponal in Venice.

Roberta Invernizzi begins her recital with ‘Disprezzata regina’ L’incoronazione di Poppea and follows it with two arias from Cesti’s lesser-known Argia of 1655, hardly less dazzling in the brilliance of its vocal line. O cara libertà is a standalone aria from a collection by a composer two generations after Monteverdi, Filiberto Laurenzi (1618-after 1651), and Invernizzi ends the album on a high with three arias from his little-known drama La Finta Savia.

Between the vocal selections, Ensemble Sezione Aurea insert instrumental interludes by Venetian contemporaries such as Rossi, Cima and Frescobaldi. The album as a whole adds up to a compelling portrait of Renzi, demonstrating her particular gift for bringing characters to vivid life on stage, and also a showcase for the vocal and dramatic talents of Roberta Invernizzi, who has taken lead roles in early operas under early-music luminaries including Alan Curtis, Rinaldo Alessandrini and Nikolaus Harnoncourt. The booklet also includes full sung texts and English translations.

Anna Renzi (c. 1620 – after 1661) was an Italian soprano renowned for her acting ability as well as her voice, who has been described as the first diva in the history of opera. Born in Rome, Anna Renzi was highly popular in Vienna in 1640s and made her debut in 1640 at the Palazzo Pallavicini-Rospigliosi in the presence of Cardinal Richelieu, as Lucinda in Il favorito del principe by the young composer Filiberto Laurenzi, who continued to function as her teacher and/or accompanist in later years. She became the most celebrated and highest-paid singer of the age, and famous composers wrote especially for her. Composers tended to make use of the full extent of Renzi's voice, which spanned from middle C to high B-flat, and the four surviving non-Monteverdian settings of roles written for her (by Sacrati, Laurenzi, Cesti and Ziani) are characterized by strong dramatic, emotional and stylistic contrasts, designed to show off her uncanny command of vocal and expressive means.

Sung by Roberta Invernizzi,, one of the leading sopranos in Early Music, sometimes called “The Diva of Early Music”. She collaborated with Nikolaus Harnoncourt, Alan Curtis, Ottavio Dantone, Ton Koopman, Fabio Biondi, and many more. On this recording she is accompanied by Ensemble Sezione Aurea, conducted by Filippo Pantieri.
More Less