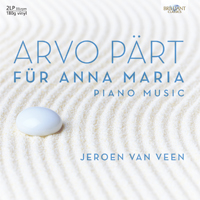 Jeroen Van Veen has released a series of acclaimed recordings on Brilliant Classics of music by the masters of Minimalism, that 1960s-derived aesthetic in which it is not so much the case that more can be said with less as that less seems to be necessary in an increasingly noisy and chaotic world. The Estonian composer Arvo Pärt has never counted himself as among the minimalist number, nor indeed was he schooled in their new traditions, but emerged in the 1960s as an angry and dissonant voice whose musically expressed anger against Communist oppression of his native country could barely be contained within the tumultuous textures of works such as the Third Symphony, but a combination of personal circumstances and aesthetic decisions led him to pare back his style to the world of eerie calm and yet underlying melancholy that has made works such as the Cantus in memoriam Benjamin Britten such an enduring favourite even among audiences who would not otherwise count themselves as aficionados of the European contemporary music scene. But then Pärt has never fitted into any one stylistic box, and alongside the quiet rapture of Für Alina we may find the student-era tinkling of the intriguing early Dance Pieces, as well as arrangements of classics such as Fratres and Spiegel im Spiegel – here interpreted by Dutch cellist Douw Fonda – that seem to preserve their special mood no matter what the instrumental forces; a quality they share with works of Pärt's compositional idol, J.S. Bach.

Other information:
- Recorded in March 2013 and March 2014 (cello arrangements).
- Estonian composer Arvo Pärt is a unique figure in the musical world. The utter simplicity of his works, inspired by his deep religious feelings, has a strange, hypnotic power over the listener. Confronted with the stark, naked and essential musical lines, one feels close to the inner truth of oneself and the other, a human bond which only music can bring.
- No wonder the music of Pärt, the cult figure, reaches beyond the boundaries of traditional classical audiences. Many recordings of Pärt achieve a bestselling status.
- This release set contains the complete music for piano, featuring the well known ‘Spiegel im Spiegel’, and ‘Für Alina’ (not yet as popular as ‘Für Elise’, but well on its way…).
- Played by the champion of Minimal Music, Jeroen van Veen, who recorded for Brilliant Classics several collections of minimalist piano
music, and the complete piano music of Philip Glass.
- Including new recordings of Fratres and Spiegel im Spiegel for cello and piano.
- Booklet notes by Jeroen van Veen.
More Less