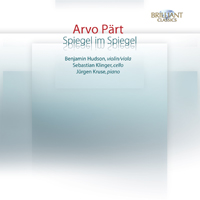 These days Estonian composer Arvo Pärt is mainly associated with his later works. Born in 1935 he wrote ‘avant-garde’ works at first. In the nineteen seventies he increasingly found his inspiration in medieval religious music, both western and eastern European. This first transpired in his Für Alina for piano. It already has the telling low tempo and (two) layers. Pärt further extended his so-called tintinnabuli (i.e. bells) style in small-scale pieces like the different versions of Spiegel im Spiegel and Variationen zur Gesundung von Arinuschka. Although this last piece has ‘classical’ features as well.

This release shows an aspect of Arvo Pärt which is seldomly heard: his small-scale chamber music works. As such this recording is a valuable addition to the material already available on the market.
More Less