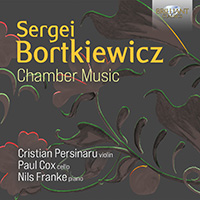 Bortkiewicz was born in Kharkiv, Ukraine, to a privileged Orthodox family. Influenced by Tchaikovsky and Anton Rubinstein, he studied theory with Lyadov at the St Petersburg Conservatoire (1896–99) before going to Leipzig (1900–02), then beginning married life in Berlin. World War I, however, saw him effectively deported back to Ukraine, where any attempt to rebuild his career post-Revolution was thwarted by the Bolsheviks.

In November 1920, he and his wife made for Allied-occupied Constantinople, where he befriended Geìza Hegyi, Hungarian court pianist to the Sultan, Mehmed VI, and gained entry to the most influential diplomatic and social circles of the day. Unsatisfied there after some 20 months, he journeyed to Vienna, where he settled for the remainder of his life and weathered (another) war, occupation, Nazi persecution, Soviet obstruction and financial ruin. Being on the wrong side of the cloth in the wrong place at the wrong time was Bortkiewicz’s over-riding misfortune.

Dating from the start of his Vienna years, the Violin Sonata Op.26 (1922) was published in 1924. A big-boned work of angst and drama, it looks back to imperial times and the poetry of generations long past. The pathos of the opening, the lacrimosa of the C minor slow movement’s last page, the bells, the 5/4 Russian dance of the finale, are arresting landmarks. The Suite Op.63 (published in 1946 as ‘Four Pieces’) conjures Viennese waltz, Iberian evocacioìn and tobacco-tinged nostalgia. The remaining three pieces for violin & piano are own-arrangements of piano solos: Berceuse (1916, from the A major Eìtude Op.15 No.4) and Nos. 2 and 5 of the Im 3/4-Takt collection (1935).

The Sibelian D flat Elegie Op.46 for cello & piano, printed in 1936, is also an arrangement of an earlier piano solo (1931). More or less contemporary with (lost) manuscripts of a Cello Sonata and Piano Trio, Bortkiewicz’s Three Pieces Op.25 – comprising a pair of pastiche dances and an opening F major Romance vaguely echoing Albéniz – date from 1924.

Recent years have seen a slow but steady revival of the music of Sergei Bortkiewicz (1877‐1952), Ukrainian composer and pianist, oppressed by the Nazis and Soviets, refugee and survivor of two World Wars, composer of wonderfully rich, appealing and colorful music in the Romantic tradition: he adopted Liszt’s rich and brilliant piano writing, Chopin’s lyricism, the imagery of Schumann’s character pieces and Wagner’s imaginative harmony.
This CD contains chamber music by Bortkiewicz: the substantial and dramatic Violin Sonata, 3 Pieces for violin and piano and the Suite for violin and piano, as well as the Trois Morceaux Op. 25 and Élégie for cello and piano.
A reissue of a previously issued recording by Cristian Persinaru (violin), Paul Cox (cello) and Nils Franke (piano).