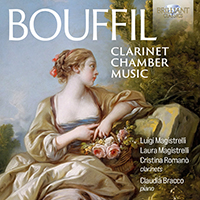 Little is known of Jacques-Jules Bouffil (or Boufil, 1783–1868) before his admission to the newly founded Paris Conservatoire in 1801. There he became a clarinet student of Xavier LefeÌvre, apparently making such rapid progress that he was awarded a premier prix on his graduation in 1806 and appointed second clarinet in the Opeìra-Comique a year later. In the years following he began to share principal clarinet duties with Charles Duvernoy until eventually (in 1821) succeeding him outright in the post.

Enter the Czech-born composer Antonin Reicha, who had arrived in the French capital from Vienna in 1808 fleeing the conflict that had engulfed Europe. A later account of 1837 tells us that while the Theìâtre Feydeau was performing Reicha’s opera Cagliostro, the composer was approached one day by Bouffil and a colleague, Gueìneìe, both members of the orchestra, asking for composition lessons. Reicha agreed, and his private class soon swelled to include other talented Parisian instrumentalists, Joseph Guillou (flute), Gustave Vogt (oboe), Antoine Henry (bassoon) and Louis Dauprat (horn) among them.

The same account goes on to relay that, as the winds had been neglected as solo instruments in favour of strings by composers of the day (Mozart excepted), Reicha had the idea to combine the five principal winds, and after some research he published six wind quintets in succession, performed by Bouffil and the above-mentioned members of his composition studio over three consecutive winters, in the foyer of the Salle Favart.

Coached in composition by Reicha, Bouffil wrote primarily for his own instrument and in a Viennese style attractively modulated with a French accent, having both virtuosic and didactic purposes in mind. Both of these sides of his output receive attention on the present album.

Scored for clarinet with piano or harp accompaniment, the Duo Op.4 follows classical precedent with a sonata-form Allegro, a brief cantabile slow movement and a brilliant finale. Bouffil’s transcription for two clarinets of the overture to Boieldieu’s comic opera La Dame blanche would have come easy after countless nights performing the work in the pit at the Opeìra-Comique. The three trios from Opp. 7 & 8 have been selected from nine such didactic works by Bouffil. Judging by the technical demands of many of the passages, he had highly advanced students in mind. The trios are structured in four movements, each with a menuet and trio, thus maintaining a tenuous link to the classical style. The three clarinet parts are complementary, with the melody line shared among them.

Regrettably little is known about the life of Jacques-Jules Bouffil (1783-1868). He was a French composer and clarinetist, a pupil of Xavier Lefèvre at the Paris Conservatoire, where he gained a First Prize in 1806, which carried with it the award of a pair of French-made clarinets in B flat and C. Also in Paris, the Czech-born Anton Reicha (1770-1836) promoted works for wind instruments, forming a quintet combining the five principal instruments, namely, the flute, the oboe, the clarinet, the horn and the bassoon. His quintets for this ensemble became widely known and popular, not in the least due to the high quality of the players, among whom was Bouffil, as clarinet player.
Bouffil’s compositions for clarinet duet and trio are some of the most attractive and original written for the medium. They are full-scale works of considerable substance and were doubtless intended for performance by professionals.
Thanks to eminent Italian clarinetist Luigi Magistrelli these works are recorded here for the first time, a delight for both clarinet players and music lovers alike.

Recorded August 2021 in Cesano Maderno and Santo Stefano Ticino (Milan), Italy. Booklet in English contains liner notes by one of the clarinettists, Luigi Magistrelli, and musicologist Peter Quantrill, along with biographies of the artists.
More Less