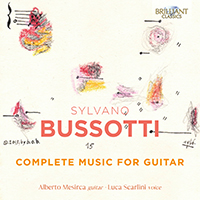 Sylvano Bussotti (1931-2021) counts among the most original and underappreciated composers working in the second half of the last century. He became famous – notorious – in the 1960s for ‘graphic’ scores which required considerable realisation on the part of the performer. His early work, however, is invested with a rhythmic regularity, a clarity of phrase structure and a lyricism reminiscent of Luigi Dallapiccola.

Pierre Boulez saw Bussotti as an anachronism when they met and (in the composer’s recollection ‘completely rejected everything that I had written so far, compositions in his view largely influenced by that lyrical mediterranean dodecaphonic style which he particularly detested.’ In retrospect Bussotti’s music takes its place alongside that of his elder Italian contemporary Bruno Maderna as a oblique and distinctively Italian, discursive and colourful view over the variegated and sometimes alienated landscape of postwar serialism.

Beyond The Rara Requiem, recorded by Sinopoli for DG, most of Bussotti’s large-scale projects such as a ‘Passion according to Sade’ have so far failed to find a place in the record catalogues, where he is mostly represented by various pieces with or for the flute. However, Bussotti also wrote prominently for the guitar throughout his career. This new album from Alberto Mesirca is the most complete survey yet recorded, beginning with Ermafrodito (1999), a ‘mythological fantasy’ for guitar which evokes a magical ballet with a body that gradually emerges in the background and takes over the scene.

Bussotti’s other substantial work for guitar is Ultima rara (Pop Song), which from the beginning undermines the promised concept of ‘last things’ with a teasing textual commentary (spoken here by Luca Scarlini) and a playful use of the kind of refrain which extends pop songs beyond the organic life of their material. Shorter pieces include the light-heated and tuneful Popolaresca, as well as a reflective take on neoclassicism, Nuvola Barocca. The album closes with a brief tribute to Bussotti on his 60th birthday from Toru Takemitsu.

Sylvano Bussotti ((1931-2021) was an Italian composer of contemporary classical music, but also a painter, set and costume designer, opera director, writer and academic teacher.
As a composer he was influenced by the twelve-tone music of Webern and later John Cage. Examples of his use of graphic notation in his pieces, often reflecting his personal life, included La Passion selon Sade and Lorenzaccio. He was a composer of the Florentine artistic school, that has been active since the end of World War II. He experimented with the interaction between sound and vision, a synaesthesis of art derived from historical avant-gardes, from Kandinsky to futurism, to Scriabin and Schoenberg, all the way to Bauhaus.
Guitarist Alberto Mesirca has been closely associated with Bussotti during his life and this new recording is a tribute to a great master and thinker. Bussotti’s surviving partner Rocco Quaglia wrote affectionately: “I attended the concert by Alberto Mesirca and Luca Scarlini, performers of a truly high level both interpretive and emotional, their technical and vocal prowess is capable of shaking and provoking, in the listener, intense feelings of pleasure and wonder. It makes me very happy to hear about the possibility of recording a CD giving a larger audience the same emotion I felt. Well done guys!”
More Less