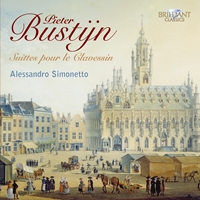 Pierre or Pieter Bustijn (1649-1729) was from the Low Countries: his family are reputed to have variously French, Belgian and Dutch origins (in the sense that we now understand those borders).We know next to nothing of the man himself, but his nine Suites for harpsichord evidently were held in high esteem in their day, being worthy of publication and wide dissemination.We can hear why: according to the eminent scholar Albert Clement, ‘The Suites offer us a surprising glimpse into Dutch musical life during the Baroque period and they are of great importance as far as the history of keyboard music in the Netherlands is concerned.’ They betray a certain Bachian influence (and why not?) in both their melodies and form, and indeed the influence is most positively appreciated in their rhythmic verve and stylish construction.

Alessandro Simonetto (B.1974) is a fine young Italian harpsichordist, as well as an enterprising digital music-publisher: the founder of both OnClassical.com and kunstderfuge.com, both vast online resources of music.

OTHER INFORMATION:
• Booklet notes on Bustijn’s life and work by Alessandro Simonetto.
• www.alessandrosimonetto.com