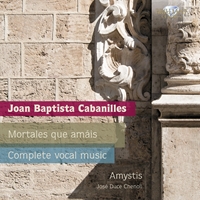 Hailed in his time as Spain’s greatest living composer, Joan Baptista Cabanilles is today considered by many to be the greatest of all Spanish Baroque composers, one whose wealth of ideas, mastery of counterpoint and command of form represent the climax of the Iberian tradition of organ music that stretched as far back as Cabezón. That Cabanilles was held in high esteem by his contemporaries is shown by his music’s wide distribution in manuscripts. Though the vast majority is for keyboard, there do exist some 10 sacred choral works – precious remnants of what must have been a much larger repertory, probably conceived for the cathedral of Valencia in which the composer spent most of his working life.

All of the works are assembled on this charming release, recorded by the chamber choir and musicological society Amystis, and a significant addition the Spanish Baroque discography that follows the completion of the critical edition by José Duce Chenoll of Cabanilles’ entire vocal music output. Chenoll, who directs and provides the intonation, postulates in the liner notes that not all of the compositions – which include a Mass and Magnificat as well as works honouring the Blessed Sacrament – were performed in Cabanilles’ lifetime, given that many are written on sketch paper (and possibly, too, in the composer’s hand), but this should not detract from their masterful quality. Revealing the composer’s great expertise in the use of musical rhetoric as well as his concern regarding varied rhythmic and harmonic effects, they are performed with aplomb by an ensemble that have made it their special task to research and promote, always via novel means, unpublished repertoire from the late 16th to early 18th centuries.

Other information:
- Recorded June & October 2012, El Puig de Santa Maria Royal Monastery, Valencia, Spain.
- Juan Cabanilles (1644-1712) was one of the most important Spanish Baroque composers. He served for 45 years as Maestro di Cappella and organist of the Cathedral of Valencia.
He wrote a substantial oeuvre for keyboard (organ and harpsichord), and a fine body of choral works, of which this new issue presents the first complete recording.
- Cabanilles’ choral works are grand scale, virtuoso and festive, composed for filling the vast spaces of the Valencia Cathedral.
- Beautifully sung by the Coro Amystis, who did extensive research into the works of this neglected Spanish composer.
-An important release, a valuable discovery of a treasure from the Spanish Baroque!
- Excellent liner notes written by the artists, sung texts downloadable by clicking 'DOWNLOAD BOOKLET' on this page (on release).
More Less