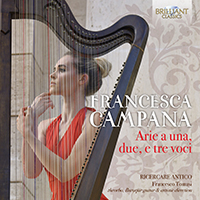 Born in Rome around 1610, Francesca Campana evidently benefitted from an education accorded to very few women of her time. Little of her background is known, but her talent and opportunity combined to cultivate gifts as a singer, keyboard-player and composer. The collection of arias recorded here was published in 1629. It enjoys the notable status of the very first published collection of music solely dedicated to a female composer. Francesca dedicated it to the Mantovan nobleman Luigi Gonzaga, and it was followed the following year by a book of madrigals; after which time she almost falls from the historical record save in her marriage to Giovan Carlo Rossi, brother of the opera composer Luigi Rossi.
However, the collection’s 15 arias are well worth investigation on account of their musical as well as their historical significance. Francesca’s style is inclined to dissonance in drawing out the expressive potential of her texts, though not to the extreme degree of Gesualdo or Marenzio. Her imaginative command of form lends great variety to the collection, as it seems to conduct an artfully constructed debate between the values of prima prattica polyphony and seconda prattica motet style; between vertical and horizontal musics, and the age-debate between the primacy of text and music.
This first complete recording of Francesca’s collection is undertaken by the Rome-based early music group Ricercare Antico under the direction of its founder-leader and lutenist, Francesco Tomasi. Their previous Brilliant Classics album of arias by Caccini (95794) attracted widespread praise. ‘Riccardo Pisani has an ideal voice for this music and he’s very well supported by the members of Ricercare Antico’ (MusicWeb International). ‘The grace and elegance of these arias is highlighted by Riccardo Pisani and the excellent accompaniment of Ricercare Antico’ (RSI Swiss Radio).

- Francesca Campana, born in Rome around 1610, lived and worked continuously in the papal city, as expressed by the name 'Romana' that often appears next to her name. Through her marriage she became related to the famous composer Luigi Rossi, and she is known to have moved in the highest musical and cultural circles of Rome. The testimonies before the marriage attest to the vocal virtuosity and skills of Francesca Campana as a spinet player. The following recommendation letter for the Duke Francesco D’Este reveals an interesting insight into the position of a woman in musical life: “If Your Highness is inclined to have women who sing, I would propose a couple of excellent ones, and the best ones absolutely in Rome. Checca Campana is the first. She is a master in art, because she composes by herself, sings like an angel, she plays divinely the spinet; she has something of her own, she wishes to be at the service of some prince, she does not ask for anything, and would be there to serve. She is a tempered woman”.
- This Collection contains arias for one, two and three voices written in strophic form, and making ample use of chromaticism and other dramatic features, fully expressing the meaning of the text.
As interludes we hear instrumental music from the time of composition, of Neapolitan origin.
- Performed by Ricercare Antico, consisting of recorder, violin, harp, archlute, theorbo and violone, as a support to the four voices. Francesco Tomasi has the artistic direction.
A fine tribute to a female composer from the 17th century!
More Less