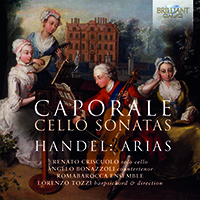 On the 260th anniversary of the composer’s death, this release celebrates Handel’s vocal works and particularly his writing for the cello. The set also sheds light on the lesser-known Andrea Caporale, one of the greatest cellists of the Baroque era and also a composer himself. In the 1730s, Handel and Caporale both lived and worked in London. While Caporale held celebrity status as the capital’s most sought-after cellist, Handel rubbed shoulders with the elite and composed for the royal court. This album takes a closer look at the time when they crossed paths.

Caporale and Handel both moved in London’s musical circles and so it’s not surprising that they often worked together. A few years after his arrival in London, Caporale became part of Handel’s Opera Orchestra; he was the star name on the bill at fundraising concerts and performed innew works such as Deidamia and Alexander’s Feast, the latter containing two arias with obbligato cello which Handel had written specifically for him. Handel brought overall vision to the music and Caporale brought expert knowledge of his instrument. Their partnership came at an important turning point in the history of the cello: Prince Frederick of Wales had recently developed a keen interest in playing it, and this propelled the instrument, once regarded as inferior to the viol, into mainstream culture. The opening track comes from Handel’s opera Parnasso in Festa and in keeping with the trend, the movement features a decorative cello solo.

The following tracks showcase Caporale’s creative output. The sonatas are characteristic of the late Baroque and various melody lines weave an intricate tapestry, through different keys and moods, before drawing to a unified close. Handel’s vocal works display similar traits and the set alternates between the two composers, revealing their similarities and how they appropriated musical trends of the era. Whereas most players of the era were prized for their virtuosity and technical prowess, Caporale was famous for his emotional playing. This attention to expressivity is highlighted in his compositions, his Sonata in F opens with a simple and songlike melody, allowing the player to bring out the emotional depth embedded in every note and the Sonata in D moves through the full range of the instrument, from the rich bass to melancholy soprano melodies.

In its entirety, this set offers both a fresh perspective on one of history’s greatest composers and the opportunity to uncover music written by his star performer.

Very little is known about the life of Andrea Caporale. He was very probably born and raised in Napoli, and he went, like many of his contemporaries, to London to find his luck as a performing artist. He became a cellist in the opera orchestra of Handel.
Caporale dedicated his set of 6 Cello Sonatas to Frederick Prince of Wales, son of Charles II, an enthusiastic cello player himself.
Handel must have been very impressed by Caporale as cellist in his orchestra, as he composed several arias with obbligato cello especially for him; these arias are included in the present recording, sung by Angelo Bonazzoli.
The cellist in this recording is Renato Criscuolo, seconded by the Romabarocca Ensemble. Criscuolo made several successful recordings for Brilliant Classics in works by Zuccari, Handel, Pergolesi and Porpora.
More Less