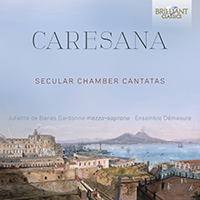 Secular cantatas of love and tragedy by a Neapolitan precursor of Pergolesi, in world premiere recordings.

Born in Venice, Cristofaro Caresana (c.1640-1709) made his career in Naples as a singer, organist, choirmaster and composer. Both sacred and secular vocal works survive but have been very little known beyond libraries. This album affords a rare opportunity to get to know a lively 17th-century musical voice, interpreted by a young early-music group.

Ensemble Démesure present eight cantatas, all based on time-honoured Classical themes. Scored for solo voice and continuo, they alternate recitative and aria, though the distinction between the two genres is often blurred. On occasions the recitatives tend in the direction of arias, whereas the arias themselves are more structured in form. In this they represent a perfect synthesis of Venetian and Monteverdi-style musical narrative, in an idiom typical of the style that made Naples the musical capital of Italy at the time of Caresana’s maturity.

La Rosa is dedicated to the flower symbolic of passion, in which thorns and petals are associated with lovelorn grief and intensity of feeling. Il Narciso tells the story of the young man who drowns having fallen in love with his own reflection in the water. Folk melodies and artful technique also combine to produce an affecting lament in the cantata Viver senza speranza (To live without hope). The closing item on the album is Tancredi sulla morte di Clorinda, setting a text famously treated by Monteverdi, to whom Caresana pays humble tribute.

Founded in 2006, Ensemble Démesure has made the Cantata – the emblematic genre of the 17th and 18th centuries – its core repertoire. The members of the ensemble hail from different countries, but share a particular interest in the Neapolitan Baroque School. They largely focus on unpublished works, delving deep into the extravagance of baroque expression and its intrinsic contrast with scholarly passion. In this sense they are Démesure: in other words, unconstrained, measureless, in their pursuit of musical chiaroscuro.

By the middle of the 17th century, Naples was still a Spanish city. It was undergoing a particularly important artistic and musical development which would last until the creation of the Kingdom of the Two Sicilies and the choice of Naples as its capital. A cultural melting pot attracting artists from all over Europe.
Cristofaro Caresana (1640-1709), a singer, organist and composer born in Venice was one of them. At the height of his career he was the choirmaster of the Chapel of the Treasure of San Gennaro and was one of the most prolific composers of his generation and era. This new recording presents unpublished Cantatas for soprano and basso continuo on secular texts, consisting of a recitativo and aria. The themes are often pastoral, amorous and slightly melancholy, but also playful and witty, the music a perfect expression of the text.
Juliette de Banes Gardonne is one of the most talented mezzo sopranos of her generation. Apart from her opera career she specializes in Baroque music, and founded her ensembe Démesure to explore the “trésors du Baroque napolitain”, an ongoing project delving in the rich heritage of the Neapolitan School.
More Less