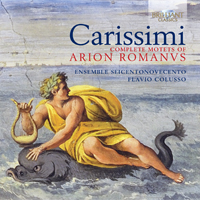 One of the most significant musical figures in mid-17th-century Rome, Giacomo Carissimi was a prolific composer of motets and cantatas, who also greatly influenced the developments of the Latin oratorio. This set brings together his 28 motets that were published under the title Arion Romanus by Giovanni Battista Mocchi, a student and loyal admirer of Carissimi. Arion was an ancient Greek bard and musician, who, in Greek and Roman mythology, was thrown overboard by pirates and rescued by a dolphin. In the liner notes that accompany this collection, the authors draw fascinating parallels between Arion and Carissimi himself: both were accomplished, charismatic and influential artists and musicians, and just as Arion was plunged into the depths of the sea, Carissimi explored the depths of the sacred music tradition to create a perfect synthesis of spiritual contemplation and intense emotional expression. The motets from the Arion Romanus collection also showcase his mastery of a wide range of formal structures, from the concertato to the madrigal.

Carissimi’s beautiful motets are brought to life here by the pioneering Ensemble Seicentonovecento, who regularly present world premiere recordings and performances of both new works and unpublished masterpieces from the past. Their conductor and founder member, Flavio Colusso, is also a renowned composer with a special affinity for sacred music.

Other information:
- This 3 CD set present the 28 Motets which were published under the title Arion Romanus, referring to the ancient Greek bard who, in Roman and Greek mythology, was thrown overboard by pirates and rescued by a dolphin. The motets are of a varied structure, in which dramatic recitatives, arias and madrigals alternate.
- Giocomo Carissimi was one of the most significant composers of 17th century Rome, he was especially known as the creator of the Oratorio, which he developed into substantial dramatic works for vocal soloists, choir and orchestra. His complete Oratorios are available on 9 CD ‘s on Brilliant Classics (BC 94491).
- Performed by the Italian Early Music group Seicentonovecento, conducted by Flavio Colusso, who received great critical acclaim in the international press for their recording of Carissimi’s complete Oratorios (see above).
- Booklet includes extensive liner notes, biographies and photos.
More Less