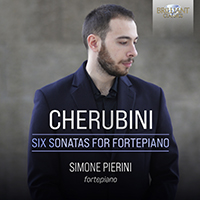 In the second half of 18th century, keyboard music in Tuscany was flourishing. Many composers wrote music for both the fortepiano and the harpsichord: the former, which was invented just before the turn of the 18th century in Florence by harpsichord maker Bartolomeo Cristofori (1655–1731), rose to an incredible degree of popularity in the last decades of the century at the expense of the latter, which experienced the last moments of its glorious history. At any rate, it was by no means uncommon that composers published music intended to be played on either instrument, as almost all keyboard pieces written in Tuscany during the 1780s were explicitly addressed per il clavicembalo o fortepiano (for the harpsichord or piano).
The Florence-born composer Luigi Cherubini (1760–1842) published his Sei Sonate per il Cimbalo around 1780; they are currently believed to be the first published work by the composer, although he had written operas and religious music prior to the publication of this work. Cherubini had moved to Bologna then Milan around that same year to study with Giuseppe Sarti (1729–1802). His chef d’oeuvre is generally recognized to be the Requiem in C minor, composed for the commemoration of the 24th anniversary of Louis XVI’s death. His compositional efforts in opera include tragedies lyriques (Démophon, Les Abencerages, Ali Baba) and opéra-comiques (Lodoïska, Medée, Faniska, Bayard à Mézières), as well as other operatic forms. In 1821, he was appointed director of the Paris Conservatory, after a highly acclaimed career as a composition teacher.
Although this was the only solo keyboard work written by Cherubini, the sheer brilliance of these sonatas allows them to be considered a pinnacle in this genre, proving the early maturity of their composer. The style of these sonatas is not too far from the musical fashion of the time: they all consist of two movements, the first in sonata-form, the second a rondò where the second theme is typically characterised by highly virtuosic writing. All six sonatas follow this strict formal code, however, Cherubini manages to create a surprising variety in the themes and their development. Each sonata could, in fact, depict a different stock character from the commedia dell’Arte, with their strict formal codification employed in a theatrical way thanks to the perfect balance of ideas set out each time. Even the bass seems to be adjusted depending on the mood of the theme – Cherubini employs Murky bass, Alberti bass and even counterpoint. The harmonic closeness between the key signatures of each sonata gives further cohesion to the whole set.
After careful consideration, Simone El Oufir Pierini found the fortepiano to be the best instrument to play these works on, although in the printed edition it was explicitly said that they should be played on the harpsichord. The piano, a new instrument, was highly favoured by the new Tuscan court, and the potential of this new instrument was sought out with keen interest by composers. The employment of the fortepiano for these sonatas hopefully sheds new light on these pieces, written by one of the most influential composers of the time.

Other information:
- Recorded June 2021 in Monte Compatri (Rome)
- Booklet in English contains liner notes by, and a biography of, the pianist
- Fortepiano: Johann Haselmann (c.1805)

- In the second half of 18th century, keyboard music in Tuscany experienced a flourishing period, in which many composers published music in a new style, close to the developments of the so-called Classical style in Vienna. Many of these composers wrote music for both the fortepiano and the harpsichord: the former, which was invented some decades before right in Florence by the Paduan harpsichord maker Bartolomeo Cristofori (1655-1731), rose to an incredible degree of popularity in the last decades of the century, at the expense of the latter, which experienced the last moments of his glorious history.
- The Florence-born composer Luigi Cherubini (1760-1842) found the opportunity to establish himself as a young composer by writing these Sei Sonate per il Cimbalo, publishing them in Florence around 1780. This is the first published work by Cherubini and also his only major contribution to this genre of music. When he later moved to Paris he mainly composed operas and symphonic repertoire.
- The style of these 6 sonatas is in the musical fashion of the time: they all consist of two movements, the first one being in sonata-form, the second a Rondò made of two contrasting episodes with a da capo section: usually, the second theme of the Rondò is characterised by a highly virtuosic writing, consisting of rapid scales, arpeggios, and octave leaps.
- Born in Rome in 1996, Simone El Oufir Pierini began studying music at the age of eight. Aged
eighteen, he graduated in piano at S. Cecilia Conservatory of Music, Rome, with highest honors, and consequently took part in masterclasses and post-graduate courses. He afterwards grew interest in historically informed piano practice, attending masterclasses led by Alexei Lubimov, Andreas Staier, Tobias Koch, Stefano Fiuzzi. Subsequently, his interest about historical keyboards in general grew further, and he began studying harpsichord and basso continuo with such teachers as Andrea Coen and Giovanni Togni. He builds an active concert career, and this recording marks his CD debut for Brilliant Classics.
More Less