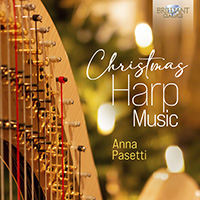 Christmas has always been a source of inspiration for musicians, and this harp album contains many Christmas pieces and famous melodies. Robert Nicolas Charles Bochsa (1789–1856) wrote much harp music, including his fantasy on Adeste fideles (dedicated to Clementi). Joseph Mazzinghi’s (1765–1844) Andante from Sonata Op.30 No.3 consists of a series of variations on the, likely pre-existing, melody that almost a century later would become the famous song Deck the Halls. Charles Oberthür (1845–1924) was the first harp professor of the Royal Academy of Music in London. His piece “Virgo Maria” is based on the ancient Marian hymn O Sanctissima. Unlike other tracks, Edmund Schüecker's (1860–1911) Weihnachtslied is not inspired by any traditional Christmas melody. His other didactic compositions are well known and still used in conservatories, unlike his concert pieces. The same can be said of his pupil, Dutch composer Johannes Snoer (1868–1936). His Phantasia combines the two themes of the Christmas carols Stille Nacht and Es ist ein' Ros' entsprungen. In France, Alphonse Hasselmans (1845–1912) was the most important harp tutor at the Paris Conservatory, teaching Tournier, Renié, Grandjany and Salzedo. Rather than depicting a light-hearted holiday scene, Hasslemans’ Conte de Noël evokes Christmas ghost tales. In 1912, Marcel Tournier (1879–1951) succeeded Hasselmans at the Paris Conservatory. Tournier composed in an impressionistic style, and his two pieces here are from his four volumes of Images (inspired by Debussy). Les enfants expresses children’s joy watching the nativity scene, and Cloches evokes the sound of bells under the snow. Hasselmans’ first choice for his replacement was, however, not Tournier, but Henriette Renié (1875–1956), perhaps the most important female harp music composer. However, the Minister of Education refused Hasselmans, as there were no women teaching principal courses at the time, and because she was a Christian when the French government was advocating secularism. The melancholic Conte de Noël opens her collection of Six Pièces brèves. Marcel Grandjany (1891–1975), a pupil of Renié, composed many pieces that remain part of study and concert programs for theharp, and his version of Stille Nacht here contrasts with Snoer’s version. Marcel Samuel-Rousseau’s (1882-1955) Variations Pastorales are inspired by an old French popular carol. Carlos Salzedo’s (1885-1961) compositions for harp were very innovative: he invented and described several of the effects that are still used in contemporary harp music. His Concert Variations are based on the song O Tannenbaum, created from a late medieval or Renaissance melody. Jingle Bells needs no introduction. Composed by James Pierpont (1822-1893) in 1850 (originally for Thanksgiving), it has become a distinctive Christmas song, arranged here by harpist Masumi Nagasawa.

Other information:
· Recorded April–June 2022 in Vendelago (TV), Italy
· Bilingual booklet in English and Italian contains a biography and liner notes by the harpist