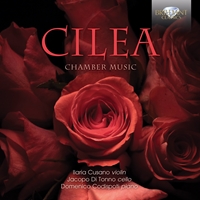 Child genius Francesco Cilea, sent to study law at just seven years of age, became a celebrated composer in late-19th- and early-20th-century Italy. Among his most famous works are the operas Adriana Lecouvreur, L’arlesiana and Gina, and the symphonic poem Il canto della vita, which was written in 1913 for the centenary of Verdi’s birth. He was awarded membership of the Accademia d’Italia in recognition of his musical achievements.

Many of Cilea’s chamber music compositions were written while the composer was in his 20s – these include the Cello Sonata in D and Trio for violin, cello and piano, both of which display a distinctive lyricism that would become a feature of much of Cilea’s mature work. The Theme and Variations and the Canto were written much later, and were originally composed for orchestra. Here they are performed in the composer’s re-arranged version for piano and cello.

Performing together for the first time on the Brilliant Classics label, each of the performers on this recording enjoys an international reputation: Ilaria Cusano (violin), Jacopo Di Tonno (cello) and Domenico Codispoti (piano).

Other information:
- Recorded on February 2013, Studio I Musicanti, Rome.
- Francesco Cilea went into history as the composer of one opera, Adrienne Lecouvreur. However, this late romantic Italian left a fine oeuvre of chamber and solo music, a selection of which is presented on this CD: the piano trio, the cello sonata and shorter genre pieces.
- They are wonderfully evocative pieces, full of subtlety and finesse, in the style of early Debussy, studies in sonority and instrumental glitter. The Cello Sonata is a valuable addition to the repertoire.
- The Italian soloists play with great clarity and feeling for the atmosphere of these colourful works.
- Liner notes and biographies included in the booklet.
More Less