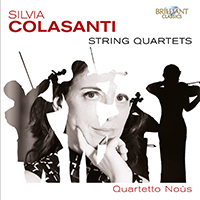 One of today’s leading Italian string quartets in the powerfully original music of a compatriot.

Born in 1975, Silvia Colasanti has an extensive catalogue of works to her credit in all the major classical genres, but her style is principally characterised by its attention to drama, whether experienced on or off the lyric stage. In 2019 the premiere of her Proserpine opera was staged to open the prestigious Spoleto Festival. ‘The score is like elegant lace,’ reported Classical Music Daily, ‘with very skilful orchestration and well-balanced vocal writing. It is not an experimental score but a good piece of music where the main themes are intertwined and can be easily played by the orchestra as well as recognized by the listeners.’

These qualities may also be appreciated in Colasanti’s work for string quartet. The expressive markings for Due destini, starting Agitato and Immobile, reveal the work’s destination of travel towards two quite different places, creating an expressive tension which the string quartet is uniquely well placed to sustain. Aria does not imitate vocal writing but rather draws on the Italian meaning of the word, ‘airs’, with music that breathes and shudders and vanishes on the wind. Di tumulti e onde, dedicated to the Quartetto di Cremona, is subtitled Studio per Faust, and its predominance of darkness over light and tumult over calm is a characterstic feature of Colasanti’s language.

Finally there is a trio of pieces that develops the themes of a piece she wrote for string quartet and percussion to accompany a text written by Patrizia Cavalli. The theme is that of a woman waking and dreaming, not unlike the lonely figure in Schoenberg’s Erwartung, and now transformed by Tre Notti into music of sudden fears and restless hopes.

The Quartetto Noûs has won acclaim in Italy and abroad for the warmth of its sound and the intelligence of its interpretations. In the UK they have found a home from home at the Conway Hall’s Sunday evening concerts, where they have given ‘forthright and well-proportioned’ Haydn, ‘strong and symphonic conviction’ to Brahms and ‘decisive and unanimous’ Bartók performances (all quoted from reviews in The Strad). This is one of the quartet’s first international album releases.

Silvia Colasanti (b. 1975) is one of the foremost female composers of today’s Italy. Born in Rome she studied at the Conservatorio di Musica Santa Cecilia. Later on she advanced her art with Wolfgang Rihm and Pascal Dusapin. She obtained the prestigious Goffredo Petrassi Award by the president of the republic. She collaborated with famous artists such as Salvatore Accardo, David Geringas, Natalie Dessay and others. Her works have been performed in Konzerthaus Berlin, Théâtre des Champs Elysées and the Biennale Venice.
Her style is described as a “Theatre of sounds”. Without the help of words she tells the story of human life, speaking of its mysteries, joys and sorrows.
This new recording presents works for string quartet: “Due destini”, “Aria”, “Di tumulti e d’ombre” and “Tre notti”. The tonal possibilities of the 4 string instruments are extended to their maximum and even beyond, creating unheard-of sonorities and effects.
Played with great dedication and love by Quartetto Noûs, one of the most interesting and innovative quartets of today, specializing in contemporary repertoire.
More Less