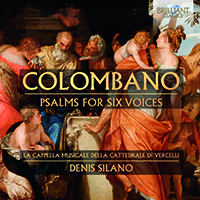 The conventual franciscan Orazio Colombano (c.1554–after 1595) hailed from Verona and came to the ancient city of Vercelli, in Piedmont, east of Turin, in 1579 to take up his first professional appointment as Moderator for Music at the Cathedral, a thriving cappella musicale under the House of Savoy, established in 1495 with a choir of six children, adult singers including a number of Flemish and French musicians, and organists, cornetto, sackbut, theorbo and string players.

Colombano spent about two years there, during which he composed the Psalms for Six Voices (Harmonia super vespertinos omnium solemnitatum psalmos sex vocibus decantanda), his first work, which sets to music the Psalms of the Vespers liturgy for all obligatory feast days, as established at the Council of Trent, preceded by the introductory ‘Deus in adjutorium’ and followed by the Magnificat.

The style is largely antiphonal, with alternating choirs in dialogue, and this collection presents as a kind of ‘compendium’ of the features of polyphonic psalms of the time: from homorhythm with rather strict syllabic declamation, to close imitative polyphony akin to Flemish models. This variety of approach gives insight into the structure of psalmodic recitation and its polyphonic treatment in the late 16th century.

This world-premiere recording is based on the score edited by Denis Silano for the series ‘Bibliotheca Musicalis Ecclesiae Vercellensis’ published by Vox Antiqua. Monsignor Silano leads the Cappella Musicale of Vercelli Cathedral, whose elite ensemble aims to revive the Vercelli Cathedral’s 16th- and 17th-century heritage of manuscripts and printed music. These soloists, specialised in early music, perform in the Vercelli Cathedral’s liturgical services.

This the first ever recording of the work Harmonia super vespertinos omnium solemnitatum psalmos sex vocibus decantanda (published in Venice by Gardano in 1579), a collection of psalms for 6 voices by Orazio Colombano (born around 1554 – died later than 1595).
Colombano was Master of Music of the Vercelli Cathedral and he wrote this monumental set of Psalms for Six Voice for liturgical use. The style largely adopts an antiphonal approach, alternating vocal groups in dialogue.
Performed by La Cappella Musicale della Cattedrale di Vercelli, conducted by Mons. Denis Silano. This group is specialized in the research and performance of the hidden treasures found in the archives of the Vercelli Cathedral. Don Denis Silano, a musician and scholar, edited the edition for the performance himself.
More Less