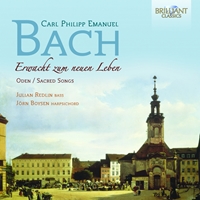 Although musical settings of strophic poems were rarely composed or performed in the early years of the 18th century, by around 1730 the genre experienced a renewal of interest. It was in this context that Carl Philipp Emanuel Bach wrote his Oden and Lieder, inspired by a group of German music critics, theorists and composers who believed that music and language could be reunified through song.

Bach’s earliest songs were based on Anacreontic poems, somewhat humorous texts with pastoral characters and settings, which generally dealt with the themes of love and drinking! Examples collected on this recording include Das Privilegium, Belinde and Die Küsse. However, Bach saved his real efforts and inspiration for settings of religious and moral poetry, which appealed to him on a more personal level. Featured on this CD, Prüfung am Abend, Osterlied and Die Ehre Gottes aus der Natur display imaginative combinations of recitative and aria, brilliant accompaniments, and a sensitive match between words and music.

As Bach’s career progressed, his approach to the genre developed. After moving to Hamburg in 1768, he published a collection of relatively simple, strophic psalm settings in response to public demand. Following this, his last collection of sacred songs, from 1780–1781, almost pre-figure Romanticism in their dramatic text settings.

Collecting together a selection of songs from each stage of C.P.E. Bach’s career, this new recording is a fascinating cross-section of his contribution to this genre. Not only do the songs, Odes and psalm settings demonstrate the variety of styles that Bach turned his hand to throughout his career, they highlight his supreme skill at combining words and music.