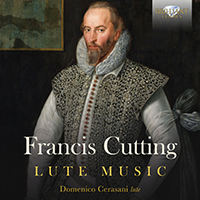 The only available album dedicated to a notable musician of Elizabethan England.

By the time of Francis Cutting’s death in 1596 he had become among the best-known of English lutenists, and but by then his reputation as a lutenist and composer had reached far beyond the Howard family of Catholic aristocrats whom he served.

As a lutenist, Cutting was probably an amateur, not a professional musician, but his works show the hand of a skilful musician and composer. His music is characterized by a preference for intricate polyphony, although he also wrote light pieces using simple homophony. In the pavans and galliards we often find a complex interplay between chordal and imitative writing.
Harmonically, Cutting’s music is sometimes forward-looking, with its extensive use of sequences and occasional flashes of harmonic daring.

One or two of his pieces are often encountered in compilations of Elizabethan-era recitals on record. It is much more unusual to find extended sequences of his work, much less a whole album. Yet, when heard in the round, it becomes clear that Cutting’s music belongs with the great names of the Elizabethan golden age. The serious mood of his pavans, the vitality of his galliards, the gaiety of his almains, together with his personal harmonic idiom and his inventiveness in using counterpoint, imitation and sequences, are all sure signs of a gifted and often inspired composer.

Now based in Switzerland as a professor of lute and guitar at the Conservatory of St Gallen, Domenico Cerasani won critical praise for his previous Brilliant Classics album dedicated to the The Raimondo Lute Manuscript of 1601.

‘There is much to enjoy on this CD.’ (Early Music Review) ‘Cerasani has chosen his selection well; his fine technique, musicality and artistic sensitivity invite the listener to transport themselves almost directly into the sound world of a lute connoisseur of the time.’ (Amadeus)

Francis Cutting (1550-1603) was one of the major lute composers of Elizabethan England, yet little is known about his life. He may not even have been a professional composer, as he is referred to as “A gentleman” and his works were not widely circulated like those of his fellow composers.

Cutting’s lute works have been preserved in three manuscripts written by Matthew Holmes and in “A new booke of Tabliture’ published in 1596 in London by William Barley.

His music is characterized by a preference for a ‘learned’ polyphonic fabric, although he also wrote light pieces using simple homophony. In the pavans and galliards we often see a complex interplay between chordal and imitative writing. Harmonically, Cutting’s music is sometimes forward-looking, with its extensive use of sequences and occasional flashes of harmonic daring.

Played by Domenico Cerasani, an Italian lute and guitar player, as well as an avid scholar. He made already a successful recording for Brilliant Classics: the Raimondo Manuscript.