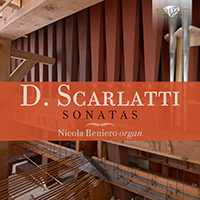 Played by the right hands, the astonishing freshness of invention of Scarlatti’s sonatas emerges with no less brilliance on the piano than his intended harpsichord. So why not the organ too?

In fact Scarlatti probably intended only three of his 555 surviving keyboard sonatas specifically for an organ. Yet even on the instruments of his own time, in churches and chapels across Europe and especially his native Italy and adopted home of Spain, the palette of colours offered by a well-appointed organ brings these vibrantly coloured works to life without any fear of them being obscured by clouds of bass pedal or resonance.

In the useful booklet note accompanying this new recording, the organist Nicola Reniero explains that his selection of 19 sonatas concentrates on particularly intricate or individual examples of polyphony and fugue where the organ’s diversity of register and colour may be thought to excel. He does so, however, without neglecting the principle that in Scarlatti’s music almost everything is vocal and theatrical: the introduction is like the curtain that rises; the themes are the characters, and the various sections of the piece are like scenes of a wordless drama.

Reniero has chosen to avoid the kind of echo effects which would be a conventional way to introduce contrast between phrases: ‘I have tried instead to emphasize the originality of the harmonies or the characters of famous themes.’ The album closes with the most spectacular of all Scarlatti’s fugues, K417 in D minor. It is a stunning piece not only on account of the frenzied finale and the unexpected change of scene that comes about halfway through the piece, but above all for the boundless energy that pervades it throughout.

For this new recording, Reniero plays the organ of the Duomo di Desenzano in the town of Garda, a two-manual instrument first reconstructed by the Serassi Brothers (1835-1837) and then restored and partially rebuilt by Marco Fratti in 2014. The booklet includes full organ specifications and photographs.

This new recording presents a selection of Scarlatti sonatas played on organ.
In Scarlatti’s time it was customary to play keyboard music on any keyboard instrument available: harpsichord, spinet, fortepiano, and also organ. There are several characteristics in a number of sonatas which indicate a specific use of the organ: the use of an independent bass line, the apparent dialogue between the two manuals of the organ, the use of strong instrumental contrasts. Several sonatas are actually called fugue, its counterpoints very suitable for the organ. The sonatas called Pastorale are simply crying out for the use of the “Flautato” register.
The recording is made on one of the largest Italian Baroque organs in the Duomo di Desenzano del Garda, restored in 2014 by Marco Fratti, the specifications of which are included in the booklet.
Organist Nicola Reniero is one of the foremost keyboard players of Italy. He is one of the founders of L’Arte dell’Arco, he played with Christopher Hogwood and Gustav Leonhardt, and he recorded for Deutsche Harmonia Mundi, CPO and Brilliant Classics.
More Less