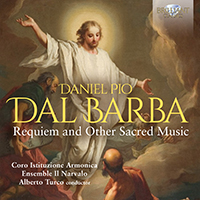 Daniel Pio Dal Barba (1715–1801) is known for his role as maestro di cappella at Verona Cathedral, as well as his successful career as an opera composer and male soprano, also in Verona. His large catalogue of liturgical music is mostly well preserved, and his sacred music can be considered a simplified version of the dominant style (in terms of harmony, counterpoint and timbre) of the first half of the 18th century. His compositions were most often written for a relatively small ensemble (three or four voices, two violins and basso continuo), whereas works by his contemporaries would typically include wind instruments also.

Dal Barba’s Messa da morto breve, or Short Requiem Mass, dates from 1779. The central text of the introit (‘Te decet hymnus, Deus in Sion’; ‘Praise to you, o God in Zion’) comprises an extract from Psalm 64 (verses 2–5) and is entrusted by Dal Barba to the solo soprano and bass, whilst the antiphon is sung by the chorus. The invocations of the Kyrie are given three distinct musical forms: a chorus with cantabile melodic lines, a duet in triple metre, and finally a fugue, with a theme that recalls the one Mozart used in the Kyrie of his Requiem K.626, composed over ten years later. The most substantial part of Dal Barba’s Messa da morto breve is the Dies irae.

Dal Barba divides the sequentia, the hymn text sung between the Epistle and Gospel readings, into three solo arias, and three where the chorus takes centre stage. The three chorus sections of the Dies irae start with a motif recalling the corresponding Gregorian theme. Throughout the complex Latin text, the chorus alternates between isorhythmic passages and imitative sections, with a style comprising simple melodic lines and recurring harmonies, culminating in the cadence of the Amen. The Messa da morto breve concludes with the Libera me, a long responsory used to say farewell to the body. It is interesting to note that the atmosphere generated by the minor keys (G minor and C minor) is continuously interrupted by the key of E flat major, which Dal Barba uses to emphasis the text ‘Requiem aeterna’ and to pre-empt the ‘serenity’ that appears following the conclusion of the final cadence, symbolising believers’ hope for resurrection.

The Gloria is a miniature cantata for three-voice chorus and soloists, divided up into the typical nine sections, a model which was used by many other European composers, including J.S. Bach. The Te Deum was, and still is, listened to as a hymn of thanks at the end of the year, and it was frequently sung to avert natural disasters or war. In Dal Barba’s Te Deum, various solos are interwoven with the sections of text entrusted to the chorus, and the final section returns to some of the harmonic and melodic ideas used in the opening of the work.

Daniel Pio Dal Barba (1715–1801) was Maestro di Cappella at Verona Cathedral, a position he took up in 1762. Before this, he taught at the Accademia Filarmonica in Verona where, on 9 January 1770, he met Wolfgang Amadeus Mozart, who was visiting the city. He enjoyed already a successful career as a composer of operas for two theatres in Verona. There are also numerous references to his work at other theatres in the Veneto and Trentino regions, where he was both a composer and male soprano.
Dal Barba's music was highly appreciated for its spontaneous and popular character. He introduced a simple style into the church, far from learned academicism but above all aimed at the common people, pleasing, melodious and harmonious.
This new recording presents Dal Barba’s Requiem, a substantial and dramatic work in which the Dies Irae alone lasts 20 minutes. Also included are a Gloria and a Te Deum.
Performed by the Coro Istituzionale Armonica, which was founded in 2018 by Alberto Turco in order to perform works by composers that have come to light in the archives of Verona Cathedral. Accompanying them, the ensemble Il Narvalo has already won critical praise for its Brilliant Classics album of music by the Spanish composer, Juan Frances de Iribarren (95859).

Other information:
Recorded July 2020 & October 2021 in Verona
Booklet in English contains liner notes by ensemble founder and organist, Federico Del Sordo, along with profiles of the choir, ensemble and conductor
Organ: Bartolomeo Formentelli (A3 = 421 Hz), at the Church of S. Lorenzo, Verona
More Less