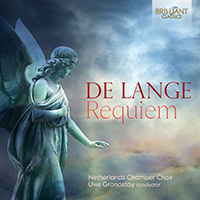 From the moment of its founding in 1937 by the Dutch pianist and conductor Felix de Nobel, the Netherlands Chamber Choir showed itself to be an ensemble of exceptional quality. Poulenc and Frank Martin were among the many foreign composers who dedicated works to the 24-strong professional ensemble, and its repertoire extends with exceptional versatility back to the early Middle Ages up to the present day, having undertaken distinguished partnerships with the most prestigious Dutch instrumental ensembles including the Royal Concertgebouw Orchestra, the Orchestra of the 18th Century and the Schönberg Ensemble.
Nevertheless, at the heart of the NCC’s repertoire is the under-rated library of sacred and secular music by Dutch composers, of which this 1993 album is a superlative example. While the sumptuous Romantic voices of Alphons Diepenbrock (1862-1921) and Julius Röntgen (1855-1932) were known quantities, at least to inquisitive listeners, the remarkable originality of the “Requiem” by Daniel de Lange (1841-1918) arrived like a bolt from the blue. Composed in 1868, the work was forgotten until its rediscovery late in the last century and belated publication in 1992.
Plainchant-like sections alternate with polyphony which would not sound out of place in a Palestrina Mass and bare harmonies which, in isolation, could have strayed from an Ockeghem motet. Yet the overall effect is entirely coherent, and as poignant in its setting of the text as the long-buried a capella Requiem by Herbert Howells. This recording remains the most significant representation of de Lange’s music on record; long unavailable, its magical beauty can be encountered afresh.

‘Music of timeless beauty, beautifully sung by the Netherlands Chamber Choir under Uwe Gronostay. I have played this disc to countless visitors, all of whom go away astonished that such music can lie unknown for over a century.’ Martin Anderson, Fanfare

· Daniël de Lange was born to a Rotterdam family of musicians. His father, Samuel de Lange, was organist at the city's Laurens Church, of whom Daniël received lessons on the piano and organ. At the age of fourteen, De Lange left for Brussels, where he continued his musical education. Three years later, in 1858, he took up residence in Vienna for a short time, enthusiastically immersing himself in the city's musical life. In 1865 he settled in Paris, where he became a church organist. Among his responsibilities in this post were the conducting of the choir, of the singing of chorales and of performances of oratorios. In 1871 he returned to Amsterdam where he was one of the founders of the Conservatory. Highly interested in Musicology and Music History he formed an A Cappella choir performing Renaissance vocal works.
· The “Requiem” (1868) may be considered a monument of nineteenth-century a cappella choral music. Set for two four-part choirs and two four-part solo ensembles (consisting of soprano, alto, tenor and bass), the work seems to reflect the choral practice of the late sixteenth and early seventeenth centuries. The musical idiom, however, was entirely new for its time and is clearly imbued with the composer's personal touch, offering a wide range of expressive qualities and moods, making the text portrayal exceptionally suggestive.
· Also included in the program are Motets by Julius Röntgen, written for the Thomaskirche in Leipzig.
· Performed by the Netherlands Chamber Choir, one of the top vocal ensembles of the world, here conducted by Uwe Gronostay.
· The booklet contains liner notes in English and Dutch, as well as the sung texts.
· An important reissue from the NM Classics label, the label of Classical Music from The Netherlands.
More Less