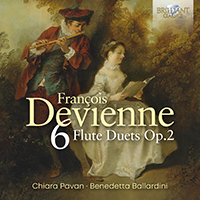 François Devienne (1759–1803) was a contemporary of Mozart and one of the few virtuosos who didn’t have to flee his own country to get noticed. Born in Joinville, France, the youngest of the 14 children of a saddle maker, Devienne received his formative musical instruction as a choirboy in his hometown and quickly developed into a flute player of formidable gifts, studying with Felix Rault. He was active in Paris as a flautist, bassoonist and composer and played bassoon at the Paris Opera. He was also a sergeant and member of the Military Band of the French Guard, where he was given the responsibility of teaching his military band colleagues’ children in its Free School of Music. After the Revolutionary period, when the Free School became the National Institute of Music, later chartered as the Paris Conservatory in 1795, Devienne was appointed as flute professor, where he taught from 1795 to 1803. He also wrote the Méthode de Flûte Théorique et Pratique (1793), which was reprinted several times and did much to improve the level of French wind music in the late 18th century.
His output includes opera, extensive educational work, and approximately 300 instrumental works that were mostly written for wind instruments. There are about 20 flute concertos, mainly written for his own use, and many of his works are still popular today in standard flute repertoire. His VII Concerto in E minor, for example, contains all the poetry and aesthetics of his music – it is quintessentially beautiful, charming, melodious and witty. Devienne's compositions for flute, revived by Jean-Pierre Rampal in the 1960s, became well-known among flutists. Unfortunately, Devienne’s fortunes declined suddenly in the new century and he died in 1803, four months after being committed to the Charenton insane asylum.

The Six duos Op.2 were written in 1786 for the captain of the guard of the Artois Count. They are a collection of six duos for two flutes, each of them divided into two movements. The general atmosphere exuded throughout the set is playful, fresh and bright, possibly because of the absence of the slow and thoughtful second movement that traditionally would have been placed between the first and last allegros. There is no shortage of singable and lyrical melodies, though: the Gracioso con Variatione, the second movement of the third duet, is a prime example.
The movement markings chosen by Devienne are primarily Allegro, Rondeau, Gracioso and Menuetto. Every tempo mark is set between a moderate and a fast, lively tempo, in order to develop either the lyrical themes or display the shimmering virtuosity of the flutes. In fact, it seems that the composer’s aim was to make the listener feel like there is only one flute playing instead of two: the sound, the articulation and the phrasing of each must be as similar to one another as possible. Needless to say, these are the greatest difficulties to deal with for the musicians. Furthermore, the pieces were written to accompany the lives of the aristocracy, for example celebrations and tea parties, which is why this kind of music is also called ‘salon music’. The two flutists made their recording using the first edition sheet music published by Sieber in Paris, c.1786.

- François Devienne (1759-1803) was a French musician and composer who was of major importance for the development of woodwind instruments, and the writing for these. From 1779 Devienne was a bassoonist in the orchestra of the Paris Opera. In 1790 he began working in the music corps of the French National Guard; he became first flautist in the orchestra of the Paris Opera in 1791. Also in the early 1790s, he published his first stage works; his opéra-comique Les Visitandines (1792) made him famous suddenly . He was later appointed first flute professor of the newly established Paris Conservatoire, where he became a much sought-after teacher. (...)
- This new recording presents the 6 Flute Duets Op. 2, skillfully written for the two instruments, offering an abundance of lovely melodies and attractive interplay.
- Played by Chiara Pavan and Benedetta Ballardini, two of Italy’s foremost flutists, enjoying an active career both as soloists and in ensembles/orchestras.
More Less