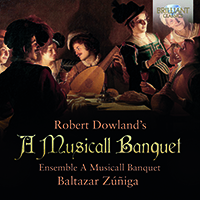 In 1610, the lutenist Robert Dowland, who had just turned 19, published two anthologies in quick succession that are today considered vital for our understanding of both the lute and Elizabethan vocal music. The first, A Varietie of Lute Lessons, which as the title suggests features lessons but also a long essay on European lute production, contains important information on lute performance, in part originating from his esteemed father, John Dowland. It is not far-fetched to imagine that Robert’s father also had a part to play in the second book, A Musicall Banquet – John had returned from the Danish court some time previously and is represented by several pieces in the anthology.

Adhering to the culinary metaphor of the collection’s title, this Banquet comprises ‘recipes’ from different countries with different levels of technical difficulty, and is made up of ‘dishes’ already taste-tested so as not to poison ‘diners’, in other words, established pieces that were nonetheless as yet unknown to the English public. The idea of offering foreign repertoire, Italian works in particular, was not new to England, where the publication in 1588 of the anthology Musica Transalpina featuring Italian madrigals (albeit translated into English) by Luca Marenzio and Giovanni Pierluigi da Palestrina had already won over enthusiasts to the madrigal as an alternative to a more typically Elizabethan creation, the song. The release of A Musicall Banquet in 1610 therefore bears witness to a trend of increased interest in new experiences from the other side of the English Channel.

Nevertheless, Robert opens his anthology with a large selection of English songs, taken from what was by that point a well-established repertoire: at the time Banquet was published, an impressive 24 books of songs had already been printed, beginning with John Dowland’s First Booke of Songes or Ayres, published in 1797.

The next group of pieces in the collection belong to a genre that could be considered the most similar to the English song, the French air de cour, in the sense that the latter, at least in its most ancient form, influenced the development of the former. The air de cour for voice and lute, a typical form of musical expression at the court of Louis XIII, was enjoying enormous success thanks to the scores Robert Ballard began publishing in 1608. Robert Dowland draws on these for his musical banquet, copying both the music and the lute tablature note-for-note, adding only the instrumental bass line, in line with English tradition.

The selection of Italian pieces is the most significant part of the collection, particularly because it once again shows Dowland’s willingness to embrace the expressive techniques of seconda pratica, albeit still filtered through the structure of the English song, particularly regarding the creation of the basso continuo. In Italian compositional practice the addition of harmony, or the ‘middle parts’, was left to the performer, who could adapt it to their instrument (theorbo, keyboard, harp etc.) and their ability; in A Musicall Banquet, however, there is still an arrangement for lute tablature that both reveals England’s reluctance to adhere to Italian practice and gives us invaluable insight into how Dowland (senior?) intended the basso continuo to be played.

· Robert Dowland (ca. 1591 – 1641) was an English lutenist and composer, the son of the famous lutenist and composer John Dowland. Upon the death of his father in 1626 Robert succeeded him as Royal Lutenist at the court. He published two collections of music, A Varietie of Lute Lessons and A Musical Banquet, an anthology of work by other composers including his father.
· The full title of the collection is:  A Musicall Banquet furnished with varietie of delicious Ayres, Collected out of the best Authors in English, French, Spanish and Italian. Composers include John Dowland, Richard Martin, Anthony Holborne, Pierre Guédron, Giulio Caccini and Robert Hales.
· The ensemble consist of Rebeca Férri (Viola da gamba, flutes and basso di violin), Francesco Tomasi (Lute) and Massimiliano Dragoni (Early drums) and tenor Baltazar Zúniga.
· Baltazar Zúniga is one of the foremost tenors in today’s Early Music world. He studied with a.o. Francisco Araiza and Gloria Banditelli. As a soloist he worked with important conductors like Gustav Leonhardt, Nicholas McGegan, Frans Brüggen, Ottavio Dantone, Philippe Herreweghe, Diego Fasolis and many others.
More Less