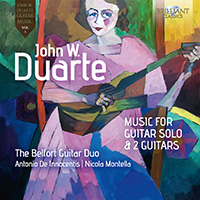 For this first monographic recording of works by John Duarte for more than 20 years, the composer’s son, Christopher Duarte, along with the artists, selected repertoire spanning three decades, with a focus on pieces that were last recorded long ago or remained unrecorded.

Opus 77 is the second in a total of seven English Suites, all for different instrumental combinations. Each movement uses an English folk song for its main thematic material. The result is a bright, sometimes sentimental, evocation of English country life. For the Suite Ancienne, a set of variations based on the ‘Première Bransle Gay’ in Pierre PhaleÌse’s Premier Livre de Danseries (1571), Duarte fashioned a Baroque Suite, minus the Allemande, drawing all thematic and harmonic material from Phalèse’s simple piece. Cancioìn y Danza was written as a compulsory competition piece and named in honour of Spanish pianist–composer Antonio Ruiz-Pipoì’s like-titled work. The slow Cancioìn displays a nostalgic and dramatic quality, whereas the fast Danza is almost ironic, capturing the spirit of Ruiz-Pipoì without mimicry. The Badinerie was intended to be a movement in a large-scale, ultimately unfinished Suite française. It was transcribed almost note-for-note for two guitars from the third movement of the Concertante Quartet Op.22 for guitar and string trio. The music is playful and full of intertwining melodic lines, with each guitar having equal responsibility for harmony and melody. Danserie No.1 is the first of four derived from the like-named collection of 1551 by Tielman Susato. Its three movements encompass disparate dance forms including an ‘Interrupted Polka’, a Galliard and a Piva (an Italian Renaissance dance). The second Danserie’s two movements reflect Latin dance types: the Tango and Tarantella. InMutations, each movement is a microcosm of a composer’s style and place, with musical portraits of Dowland, Scarlatti, Haydn, Brahms, Albéniz, Charlie Parker and finally Duarte himself. Sans Cesse Op.34 was commissioned by Ida Presti, who wanted a piece “for an encore, and with lots of effects”. She sadly died one week before it was completed. The music, a true moto perpetuo, demands the utmost dexterity and coordination of the players.

John Duarte (1919-2004) was educated at the Manchester University Faculty of Technology. He worked as a professional chemist until 1969, then abandoned chemistry in favor of full-time dedication to music, after having been persuaded by Len Williams, father of John Williams. His only formal musical education consisted in jazz guitar lessons with Terence "Terry" Usher, the rest he learned by self-instruction. He also worked professionally as a player of the trumpet and double bass, and regularly worked as a jazz musician, among others with Coleman Hawkins and Django Reinhardt.
Duarte taught at the London-based Spanish Guitar Centre, which Williams senior had founded and where the young John Williams studied with him. Williams acknowledged the early influence of Duarte by including his works and transcriptions in his first recording.
Duarte was in close contact with many of the great guitarists of his time, notably Andrés Segovia, Alexandre Lagoya and Ida Presti, for whom he wrote new compositions.
Duartes work shows an exceptionally wide range of styles. Some works reflect the Renaissance style of court lutenists such as John Dowland, other works alternate in style between aleatory, atonal and graphic, contained within a conventionally notated framework and allowing spontaneous reaction between the performers. In many other works he employs a tonal language, often colored by the folk music traditions of various nations, and romantic in mood. "This versatility puzzled some commentators, who found difficulty in perceiving the true Duarte. But this was, in fact, the true Duarte, never easy to categorize, always unpredictable, his agile and fertile mind able and willing to leap without apparent effort from one area of music to another." (‘Colin Cooper in Duarte's obituary in The Independent').
This new recording contains: Badinerie Op.32a, Canción y Danza Op.117, Danserie No.1 Op.71, Danserie No.2 Op.87 and Sans Cesse Op.34, English Suite No.2 Op.77, Mutations Opp. 58 & 58a and Suite Ancienne Op.47.
Played by Nicola Montella (guitar solo) and the Belfort Guitar Duo.

Other information:
Recorded August 2020 & April 2021 in Naples
Booklet in English contains liner notes on the composer and his music by the composer’s son, Christopher Duarte, along with the artists’ biographies
*world-premiere recordings
More Less