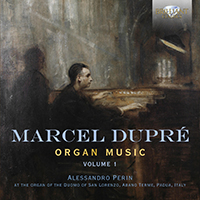 The output of Marcel Dupré (1886-1971) is so vast and various that only scholars and fellow organists can expect to grasp its scale. Most listeners require a discerning ear to pull out some of the many highlights. The Italian organist Alessandro Perin has done so here, without confining himself to Dupré’s ‘greatest hits’, the characteristic pile-ups of chorale harmonies and torrents of semiquavers in toccatas and variations that find their natural home on the instruments of Cavaille-Coll as an apotheosis of the French Gothic organ style.
Instead, Perin’s selection is more diverse. It begins with the Suite Op.39: four pieces originally written as part of a collection of 12 Studies, though they bear no trace of didacticism. Rather, there is a Lisztian quality of invention to their virtuosity, from the glittering cascades of the opening Allegro agitato to the driving counterpoint of the finale.
The four settings of the Ave maris stella chant are progressively more ornate, from a simple statement of the chant over a walking bass, through an intricate Bachian chorale prelude, to a final, brilliant toccata. The ‘old Christmas carol’ featured in Op.20 variations is known in English as Now the green blade riseth: in one of his most justly celebrated works, Dupré treats the theme to a dazzling array of transformations, stretching the organist’s technique to the limit.
At the height of the Second World War, Dupré composed the Evocation in memory of his father, and gave its first performance at the Cathedral in Rouen in 1941. Exactly what is being evoked is left to the listener to decide, though only the tender second-movement elegy casts its gaze back with fondness; the strident progress of the first movement seems to reflect the troubled times, and the finale has its own struggles to overcome in a final blaze of C major triumph.
Born in 1984, Alessandro Perin studied with distinguished early-music performers and teachers such as Roberto Loreggian and Andrea Marcon, but he is most inspired by the playing and compositions of Jean Guillou. This release marks his debut on Brilliant Classics.

Dupré was unquestionably one of the most eminent figures of the French organ school in the twentieth century. He began his musical studies at the age of seven, and very quickly his prodigious gifts were recognized. He had lessons with Widor and Guilmant, and soon built an impressive international career as organist and composer. He was organist of the Paris Notre Dame between 1916 and 1920, and in 1934 succeeded Widor at the Paris St. Sulpice, with its famous Cavaillé-Coll organ.
Dupré’s organ works were strongly influenced by the possibilities of the organ he played on. His style is typically French, influenced by the harmonic language of Fauré and Franck, and inspired by Gregorian Chant, making full use of the orchestral colors and registers of the symphonic organs built in his time, especially the magnificent instruments by Cavaillé Coll.
This new recording is the first of a projected complete cycle. It contains the Suite in F minor, 4 Verses on “Ave Maris Stella”, Évocation Op. 37 and Variations sur un vieux Noël.
Italian organist Alessandro Perin plays the impressive organ of the San Lorenzo Duomo, Abano Terme, Padua, Italy, the specifications of which are included in the booklet.
More Less