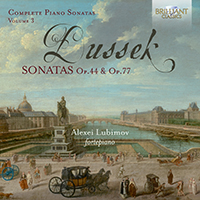 One of the great Russian pianists of our time in a new studio recording of sparkling sonatas by a contemporary of Beethoven.

Alexei Lubimov has long been renowned for his beautifully weighted and persuasive performances of new music, especially from his native Russia, by post-Soviet composers such as Sofia Gubaidulina, Alfred Schnittke and Valentin Silvestrov. He is a restless seeker after beauty in music wherever it may be found, equally at home in music as diverse as Chopin, Debussy, Pärt and Cage. His interest in historically relevant instruments for historical repertoire stretches back decades to a time, especially in the Soviet Union, when such an interestwas unusual and even eccentric to some, but Lubimov has always been a pianist of profound integrity who goes his own way without regard to passing fashions.

It is in this capacity, as a fortepianist, that Lubimov has made a distinguished contribution to the ongoing Brilliant Classics series dedicated to the complete sonatas of Jan Ladislav Dussek. As he writes in a characteristically illiuminating booklet essay, the two sonatas Op.44 and Op.77 belong to the mature and most original of Dussek’s works. Composed in 1799, Op.44 is a truly fin-de-siècle work, not coincidentally subtitled ‘Farewell’, with bold modulations that cast their gaze forward into a vision of the Romantic age as much as the rhetorical structures belong to the Classical era of Haydn and Mozart.

The emotional candour, the romantic impulse and the depressive melancholy in Dussek’s presentiment of his coming death make the Op.77 Sonata (L’Invocation’) an even more entrancing anticipation of the world of Chopin. For a fusion of Baroque gestures, Classical sonata forms, novelty and expression of the melodic contours, the richness of the piano writing and the boldness in the use of all possible resources of the instrument, there’s no-one quite like Dussek, and Alexei Lubimov is a peerless exponent of his expressive world.

The continuation of an exciting new project: the recording of the complete piano sonatas by Dussek! Dussek’s style is rich, harmonically expressive and pianistically challenging, Classicism on the brink of Early Romanticism.
Johann Ladislaus Dussek (1760-1812) was born in rural Bohemia. He led a restless life, travelling Europe as a keyboard virtuoso and settling in several European capitals, notably Paris and London, where he became a fashionable pianist and teacher. His close connection to piano manufacturer Broadwood resulted in important innovations, notably the extension of the keyboard to 6 octaves. Sonatas Op.44 and Op.77, are two of Dussek's most original and mature works. They bear witness of the musical styles of his time: the Baroque polyphony and canonic imitations, the rhetorical formulae and passion of the Sturm und Drang and the charm and coquetry of the Galante Stil.
Alexei Lubimov is one of the most original pianists of our time. A pupil of the great Heinrich Neuhaus he diversified his interests and is now equally at home in contemporary music as in Baroque music, playing both the modern piano and period instruments. His recent recording of keyboard works by C.P.E. Bach played on a tangent piano received numerous international awards.
More Less