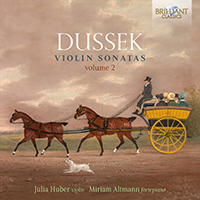 Jan Ladislav Dussek (1760-1812) was a cosmopolitan piano virtuoso who studied with C.P.E. Bach, lived and performed in one European capital after another in a tumultuous progress across the continent, and wrote huge quantities of eclectic music which has largely been forgotten.
Dussek’s music for his own instrument may now be much better known than half a century ago – not least thanks to the first period-instrument edition of his piano sonatas, produced by Brilliant Classics – but he wrote almost 80 violin sonatas which also deserve revival as the product of a fluent and always inventive mind working on the cusp of eras we now identify as Classicism and Romanticism.
The three sonatas gathered here as Dussek’s Opus 1 were published around 1780. Each of them is cast in two movements: a lively Allegro in sonata form, followed by a Rondo or (in No.1) a set of variations, gentle and even meditative in character, in which Dussek’s originality shines through the occasional, recitative-like episodes.
The six sonatas of Op.28 belong to the genre of ‘accompanied piano sonatas’ in which the musical substance is conceived principally for the keyboard instrument, with an obbligato melody instrument (such as the violin or flute) adding or doubling a top line if convenient. By the time he wrote them in 1795, Dussek had been a celebrity of London musical life for six years, having fled revolutionary Paris in a hurry. The dedication to ‘Miss Shaw’ refers to one of the daughters of the composer Thomas Shaw, and one may imagine the father on the violin accompanying and encouraging his daughter on the piano in Dussek’s vivid evocations of rural life and the lively march of a tin-soldier regiment.
Dussek’s sonatas are played here in new recordings by the German duo of Julia Huber and Miriam Altmann in polished and historically informed performances, using an authentic 1780 fortepiano. Huber has worked with German period-instrument ensembles such as L'Orfeo Baroque Orchestra, La Stagione Frankfurt and the Collegium Cartusianum in Cologne.

- The second volume of the recording of the complete Violin Sonatas by Dussek.
- Johann Ladislaus Dussek (1760-1812) was born in rural Bohemia. He led a restless life, travelling Europe as a keyboard virtuoso and settling in several European capitals, notably Paris and London, where he became a fashionable pianist and teacher. His close connection to piano manufacturer Broadwood resulted in important innovations, notably the extension of the keyboard to 6 octaves.
- Dussek’s style is rich, harmonically expressive and pianistically challenging, Classicism on the brink of Early Romanticism.
- Carl Friedrich Cramer writes in the “Magazin der Musik” in 1783: "These sonatas are the only ones of their kind. Rich in new thoughts and traces of the author's great musical genius. Very brilliant, and appropriate to the instrument. The accompaniment of the violin is so artificially combined with the piano part that both instruments are kept in constant attention; so that these sonatas require a violin player who is just as skilled as a piano player."
- Played by Julia Huber (violin), a prizewinner of the Locatelli Competition Amsterdam, and concertmaster of L'Orfeo Baroque Orchestra Linz and La Stagione Frankfurt. Miriam Altmann studied piano, fortepiano and harpsichord, she specializes in the Early Classical repertoire and recorded works by Gyrowetz. Both musicians play period instruments.
More Less