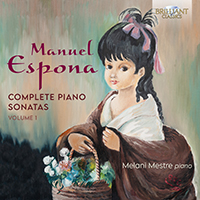 A Catalan contemporary of Scarlatti, Manuel Espona (1714-1779) is known now, if at all, as the teacher of Antonio Soler, one of the fathers of Spanish keyboard literature. Melani Mestre’s recording, the only modern album dedicated to this composer, reveals that Espona was a fine composer in his own right.
Like Soler, he composed in both sacred and secular genres, but much less of his work has survived. He lived and worked at the famous monastery of Montserrat, having taken holy orders there in 1733. He shared the post of maestro de capilla at the monastery’s renowned choir school (which Soler would in time direct) with Benet Esteve. There are 27 surviving single-movement sonatas for keyboard, which Melani Mestre has edited for publication, and selected 14 of them for this new recording.
Mestre’s sonatas are notably individual in nature, leaving behind the typical Italian-influenced tradition of the first half of the 18th century, as exemplified by Joan Baptista Cabanilles. This is reflected not only in the way Mestre develops a highly original musical discourse, but also in his choice of key for each sonata, his modulations, his painstaking and elaborate ornamentation, his innovative rhythmic textures and a whole host of personal touches that lift these sonatas above the keyboard music of his contemporaries. Like many of those written by Soler, Espona’s sonatas are characterised by their galant style, without foregoing moments of virtuosity, brilliance and restrained lyricism.
Espona’s own instrument would have been the harpsichord, but the modernity of his idiom translates well to the modern piano, according to Melani Mestre: ‘the piano allows the whole range of dynamics, articulations and ornamentations that make up the Espona style and brand to be heard in even sharper focus.’
A pupil of Alicia de Larrocha, Melani Mestre is a distinguished exponent of the Catalan piano tradition who has performed many little-known concertos by native composers. In 2009 he discovered, completed and performed the sketches for a concerto left by Enrique Granados, later making a recording as part of Hyperion’s much-acclaimed ‘Romantic Piano Concerto’ series.

Born in Sant Feliu de Torelló, Catalonia, in 1714, Manuel Espona died on 9 January 1779 at the Monastery of Montserrat, where he had been an acolyte between 1724 and 1733, studying with Father Vicenç Pressiach. Montserrat was one of the main centers of musical study and practice in eighteenth-century Spain, and Espona, who took holy orders in 1733, was unquestionably one of its leading composers and teachers (among his pupils was Antonio Soler). His single-movement Piano Sonatas are written in the typical Italian-influenced tradition of the first half of the eighteenth century. This is reflected not only in the way he develops a highly original musical discourse, but also in his choice of key for each sonata, his modulations, his painstaking and elaborate ornamentation, his innovative rhythmic textures and a whole host of differences that lift these works above the rest, turning them into a genuine musical treasure trove.
Hailed by international critics as “A truly virtuoso musician of the world elite” ("The Daily Telegraph" Melani Mestre has risen to become one of the most internationally acclaimed pianists and conductors of his generation. He is particularly a champion of the repertoire of his native country Spain. For Hyperion he recorded the Piano Concertos by Isaac Albeniz and Enrique Granados.
More Less