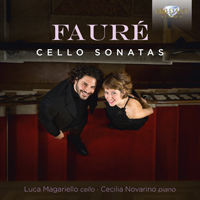 Elusive masterpieces of French chamber music on the cusp of Romanticism and the modern age.

Fauré was a reserved, self-effacing man particularly drawn by the intimacy of chamber music. Deeply attached to the romanticism of an earlier age, he is considered the last of the romantics. Debussy described him as a ‘maître de charme’, an epithet that still rings true.

During the First World War Fauré remained in Paris as head of the Conservatoire, and despite its external turmoil, this period (lasting for him until 1921, the year of the Second Cello Sonata) was the most productive of his life. His compositions of this period are notable for their force and even violence from a composer who is usually renowned for his delicacy and restraint. In fact the first movement of the First Cello Sonata is among Fauré’s most angular and assertive pieces.

The Second Sonata shares a flowing, elusive quality with much of his late music, but it falls on the ear with almost deceptive ease: ‘How lucky you are to stay young like that!’, remarked Vincent d’Indy to the 78-year-old composer when he first heard the sonata’s effervescent finale. Fauré himself remarked with typical understatement that ‘Music consists in raising us as far as possible above what is. I carry within me a certain desire for things that do not exist.’ There is a sense in which these late cello works speak in a Romantic language which the composer already knew was dead – and yet every note within them is uniquely his own, averse to tragic declamation yet unwilling to shake off a melancholy spirit of reflection Praised for their ‘excellent’ playing by the Dutch Opusklassiek magazine, the husband-and-wife team of Luca Magariello and Cecilia Novarino recorded the cello sonatas of Nikolai Myaskovsky for Brilliant Classics (95437). The album attracted glowing reviews which the new recording is sure to share: ‘The duo's longstanding partnership leads to a seamless play of sympathetic expression, so that the two sonatas are given an effective interpretation.’ (Pizzicato magazine). ‘There is an immediacy and transparency to Magariello's and Novarino's playing… Sensitive and original interpretations.’ (Classical.net)

The two sonatas for cello and piano by Gabriel Fauré (1845-1924) were composed in the last decade of the composer's long and fruitful creative life. They are a significant example of how Fauré has evolved and developed his musical language during his lifetime. A reserved personality living in his own intimate creative world, deeply rooted in the romanticism that preceded him, he is considered the last of the romantics, in an age whose musical language had long been devoid of nineteenth-century canons.He is known for his vast quantity of light, expressive songs, characterised by natural, singable melodies of a charming and sweet sentiment. They became immensely popular and Tosti made a fortune with them.
The music of this "maître de charme" (As Debussy called him) is essentially lyrical and his highly personal melodic and harmonic language has an exquisite quality.
Luca Magariello is one of Italy’s foremost cellists. He and his partner Cecilia Novarino already made a highly successful recording for Brilliant Classics with cello sonatas by Miaskovsky.
More Less