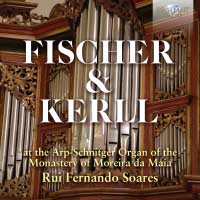 Fischer was likely Bohemian, specifically from Schönfeld, Carlsbad (now Krásno, Karlovy Vary in the far west of historical Bohemia), and was a very influential musician and composer in his day. Little is known of his career until the 1690s, when he was named capellmeister to Ludwig Wihelm of Baden, where he remained until his death at Rastatt. His largest and perhaps most significant work is the Musicalischer Parnassus of 1738, a collection of a great number of keyboard pieces organized into nine suites. In it, Fischer combines the French orchestral style with the German style.

Each of the suites is named for one of the nine Muses. This recording features movements from the Urania and Euterpe suites, along with a Prelude and Chaconne from his remaining oeuvre. This repertoire is usually associated with the harpsichord and rarely performed on the organ, yet there are similarities with the “variations” style so often employed by Buxtehude and Bach in organ works.

Kerll, the son of an organist and organ maker from Adorf in the south-west Saxon part of historic Vogtland, showed musical promise from a very early age. He travelled to Vienna to study under Valentini, then capellmeister at the Viennese Imperial Court, and he converted to Catholicism, which later led him to Rome where he likely had contact with Carissimi and Frescobaldi. He was named principal musical director to Ferdinand Maria, Elector of Bavaria, in 1656 and became one of the most acclaimed composers of his day. His influence on Handel and J.S. Bach is notable. His works display a mastery of the Italian concertante style and highly developed contrapuntal technique.

Other information:
- Recorded at the Arp Schnitger organ (1701), São Salvador Monastery, Moreira, Maia (Porto), Portugal, in September 2017
- Booklet in English contains notes on the organ and the composers, a biography of the organist, and the organ stop-list and specifications
- The registrations for each piece are available at www.brilliantclassics.com
- Arp Schnitger (1648 -1719) was probably the greatest and most influential German organ builder. He firstly built in Northern Europe, especially in the Netherlands and Germany, but some of his organs can also be found in Portugal, Brazil, England, Russia and Spain. In 1853-54, Siwert Meijer, organist in Groningen (Netherlands), wrote that according to Arp Schnitger’s original manuscripts, in 1701 Schnitger had sent two new organs to Portugal, each with 12 registration, two keyboards and a bellow, their destination however being unknown. Finally, around 1986-87, one of these “two organs”, was found in Moreira, and was later restored by the German master organ maker Georg Jann.
- On this new recording we hear this “lost and found” instrument in its full glory in repertoire from its time of origin by two masters of the North German organ school: Johann Kaspar Ferdinand Fischer (1656-1746) and Johann Caspar Kerll (1627-1693).
- Rui Fernando Soares is one of the foremost keyboard players of Portugal. In 2008 he attended at the International Organ Festival of Haarlem (Netherlands) where he worked with Prof. Bernard Winsemius. In 2012 he concluded his Master's degree in Early Music at the Conservatory of Amsterdam with a “Cum Laude” distinction. There he studied organ Prof. Pieter Van Dijk and harpsichord with Prof. Tileman Gay. At the same time, he studied under the guidance of Prof. Ton Koopman.
- The disposition and technical specifications of the organ are included in the booklet.
More Less