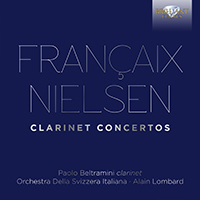 A unique pairing on record of 20th-century clarinet concertos, full of musical laughter and mischief. As principal clarinet of the Orchestra della Svizzera Italiana based in Lugano, Paolo Beltramini may be seen on many films of the orchestra in action such as a beautifully shaded set of the Brahms symphonies filmed by Sony and conducted by Markus Poschner. Beltramini shines in Brahms’s slow movements with many solos of doleful and consoling ease.

For this album, his debut on Brilliant Classics, he leaves his chair and stands out front for two clarinet concertos which have enjoyed strikingly different fortunes. The Nielsen is a classic of the genre, probably the best-known and most-played example from the last century, abounding in Nielsen’s zany humour and rebellious temperament. This four-movement work opens conventionally enough with a cheeky little melody soon taken on a gentle flight of fancy by the soloist, but it’s clear, as so often with this composer, that danger and even catastrophe lurk around the corner. Nielsen intended as a portrait of a leading Danish clarinettist of his time, Aage Oxenvad, who was reportedly ‘somewhat choleric in temperament, irascible but warm at heart.’ The concerto, it was said by those who knew him, captured the very soul of Oxenvad.

Outside his native France, the reputation of Jean Françaix has not flourished like that of Nielsen, especially since his death in 1997. Françaix was a fluent musician to a fault, born and brought up within a deeply musical family unlike Nielsen, and blessed with a ready way with melody. In 1968 he wrote this four-movement concerto and dedicated it to the bassoonist and conductor Fernand Oubradous; the first soloist was one of his students, Jacques Lancelot.

Françaix admitted (not without pride) that the concerto was ‘a kind of aerobatics display for the ear, complete with loops, wing-turns and nose-dives which are fairly terrifying for the soloist’ – and indeed both works here stretch the technique of any clarinettist to the limit.

This new recording presents two 20th century Clarinet Concertos, by Carl Nielsen and Jean Francaix, each a masterwork in their genre.
The Clarinet Concerto by Danish composer Carl Nielsen was premiered in 1928 by Aagen Oxenvad, dedicatee of the work, and who was also closely involved in the creation of the work. It is a bold, highly expressive and virtuoso work, full of extreme contrasts so characteristic of Nielsen. It became a cornerstone of the repertoire.
The Clarinet Concerto by Jean Francaix is a highly demanding tour de force, full of French "esprit". Francaix about his work: "This concerto is, or at least I hope it is, amusing to listen to. It is a kind of acrobatics display for the ear, complete with loops, wing-turns and nose-dives which are fairly terrifying for the soloist, who needs to have a good stomach and several thousand flying hours under his belt". Clarinetist Paolo Beltramini was First Prize winner of the Prague Spring Festival in 1996. As a chamber music player he collaborated with Martha Argerich and Heinz Holliger. He has been first clarinetist of the Concertgebouw Orchestra and the Mahler Chamber Orchestra. In this recording he plays with the Orchestra della Svizzera Italiana, of which he is presently first desk player.
More Less